Early 1900s map of Warren Creek, before the falls was diverted

Until the 1930s, Warren Creek was much like it’s neighbors to the east and west in the Columbia River Gorge, plunging in a spectacular waterfall as it reached the final wall of cliffs lining the river. For millennia, the stream had slowly carved a huge amphitheater in sheer basalt, thundering into a deep splash pool at the base of the cliffs, before rushing to the Columbia.

The railroads crossed Warren Creek in the late 1800s, and by the 1920s, Samuel Lancaster’s iconic Historic Columbia River Highway had been constructed, and passed the stream near the falls. Sometime in the late 1930s, the Oregon Highway Department determined that Warren Creek posed a risk to the highway grade, and made the improbable decision to re-route the falls through a tunnel, depositing the stream a few hundred yards to the west.

The legacy of this bizarre project is man-made waterfall now known as Hole-in-the-Wall Falls, for the fact that Warren Creek continues to burst out of the diversion tunnel blasted in the 1930s. The true falls are still “upstream”, so to speak — the streambed of Warren Creek above the man-made diversion is now dry, though it looks to have flowed yesterday.

At the head of the dry streambed, the former Warren Creek Falls also looks as if it flowed recently, even though the diversion has been in place for more than 70 years. A bright green ribbon of moss and ferns traces the graceful chute where a horsetail-shaped falls once roared down the cliffs. A huge mound of debris has since accumulated at the base of the falls, perhaps from occasional overflows of the weir above the falls that normally directs the stream flow to the diversion tunnel. 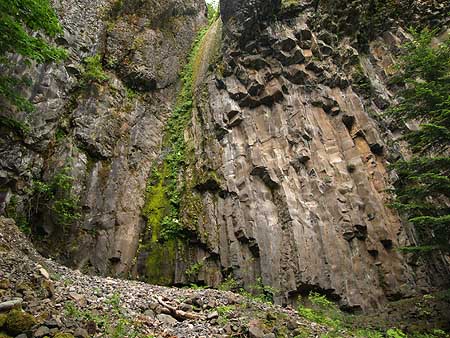 Someday, a natural storm or geologic event will surely block the tunnel, or destroy the weir, and Warren Creek Falls will once again flow through its magnificent grotto. But why wait? What better statement of our dedication to healing the misguided scars of the human past than to bring back this lovely waterfall?

The benefits would be many. First, the natural setting of the falls is unique and spectacular, and would become an instant destination for hikers and waterfall lovers. Though there are hundreds of waterfalls pouring over basalt cliffs in the Gorge, the basalt columns at Warren Creek Falls are especially dramatic. Restoring the falls would also add back several hundred yards of salmon and steelhead habitat, since Warren Creek flows directly from the falls site to the Columbia.

The project could also serve a preventive purpose, since the long-term impact of introducing water to the bypass tunnel may be undermining the stability of the huge cliff face that it passes behind. Already, there are signs of spalling rock on the cliffs near the tunnel, suggesting that the diversion is having an impact on the structural integrity of the cliff. Decommissioning the tunnel could at least arrest this impact.

As fanciful as this project seems to be in a time of tight public budgets, there happens to be a once-in-a-generation opportunity to link the restoration project to a nearby transportation improvement. According to tentative plans for the Historic Columbia River Highway (HCRC) project, the segment of old highway that passes in front of the falls will soon be restored and reopened as a bikeway and pedestrian path, similar to other sections that have been restored over the past two decades.

There is perfect symmetry to linking the waterfall restoration to the reopening of the highway, since it was the highway that led to the demise of the falls. This symbolism is important as a statement of healing and environmental justice. Therefore the project planning should include not only the planners, scientists, architects and engineers needed to design the effort, but also Native Americans representing the countless generations of native peoples who likely visited this spot over the millennia, and perhaps considered it to be of spiritual significance.

The HCRH plan is the key for restoring Warren Creek Falls

How would this work?

How would restoration of Warren Creek Falls work? The first task would be to prepare the dry stream bed for the return of an energetic, flowing stream. Warren Creek is fed year-round by snowmelt from the high slopes of Mount Defiance, and the dry streambed provides a perfect opportunity to engineer an ideal salmon and steelhead habit.

Next, the crowded thicket of young Douglas fir that has colonized the spray slope of the splash pool, near the falls, would need to be thinned and prepared to grow into a healthy stand, perhaps someday framing the falls.

There is also a fair amount of English ivy in the area (dating back to the roadhouses and homesteads that once dotted the old highway) that must be pulled, and this would make for an ideal volunteer project. Likewise, groups like Trailkeepers of Oregon could design and build the short footpath needed to take visitors from the old highway to the base of the newly restored falls.

Finally, the stream diversion at the top of the falls would need to be dismantled. Blocking the diversion tunnel is straightforward – the tunnel is only about five feet in diameter, and could be filled with natural stone or a manufactured plug. The weir at the top would also be removed, allowing the stream to flow into its natural course, and over the falls.

What would become of the man-made Hole-in-the-Wall Falls? It would be reduced to a mossy spot on the cliffs, much like Warren Creek Falls is today. But interpretive signage along the adjacent trails could simply point to this curiosity as a symbol of humanity’s hubris, and an earlier time when engineers moved inconvenient waterfalls simply because they could.

This should be an easy project to accomplish, but unlike those bold days of the 1930s, when an engineer could simply decide to move a waterfall, modern times call for more planning and preparation. The HCRH project provides the perfect venue for accomplishing the planning and for funding the project.

However, it will require ODOT to be creative, and involve other state and federal agencies that can help with the project details. But with some ingenuity and dedication, it is quite possible that the falls could be flowing again by 2014, the centennial celebration of Samuel Lancaster’s spectacular road. It’s hard to imagine a better tribute to Lancaster’s original vision than to restore a falls that he specifically had in mind when he designed this section of his elegant highway.

It’s fun and interesting to visit the dry Warren Creek Falls. Simply follow I—84 to the Starvation Creek State Park exit, park at the rest area, then follow the trail signs pointing west to the Starvation Ridge Trail. The route briefly follows noisy I-84, then ducks into the trees, following the moss-covered surface of the old highway past Cabin Creek Falls, a tall, wispy cascade framed by house-sized boulders.

A short distance beyond Cabin Creek, the route becomes a forest trail, soon arriving at the bridge over Warren Creek at the half-mile mark, at the base of Hole-in-the-Wall Falls. Look to the left before crossing the bridge, and you will see the dry former stream bed of Warren Creek coming around a bend. Simply follow the old stream bed for 200 yards to the massive, hauntingly quiet amphitheater of the former falls. Look closely, and you’ll see markings on the cliff that date back to the construction work on the bypass tunnel that passes behind this cliff.

You can extend your hike another half mile to Lancaster Falls by continuing over the bridge, then uphill to a T-junction: go right for a short distance to reach the bottom tier of this very tall falls, named for Thomas Lancaster. For still more hiking, you can retrace your steps to the T-junction, then continue about one-half mile east and uphill on the Starvation Ridge Trail to Warren Creek. You’ll pass scenic cliffs and viewpoints along the way, and the bridge-less trail crossing at Warren Creek makes for a pleasant lunch spot.