The sprawling vista into the Gorge from Tunnel Point Wayside

Mostly lost in the noise of Interstate-84, the tiny Tunnel Point Wayside is a forgotten bit of ground that deserves a little more respect. This spot is named for the railroad tunnel that cuts through the lower buttress of Chanticleer Point, to the south. In the early days of Highway 30 construction in the Gorge, the wayside at Tunnel Point was designed as a scenic turnout for visitors. From here, the first big view of the Gorge spreads out, with Crown Point and Vista House framing the scene.

Today, freeway barricades prohibit access to the wayside for eastbound travelers entering the Gorge, and the turnout is an afterthought for most westbound travelers, since the Gorge view is behind them. The wayside has thus devolved into a huge, paved layover spot for semi-trucks — a sad epitaph for what should (and could) be a premier gateway viewpoint in the Gorge.

Tunnel Point has two U.S.G.S. benchmarks and a ship beacon bolted to its tiny, rocky cape. Beyond the sterile steel guardrail that borders the turnout, basalt cliffs drop 20 feet into the river. These little cliffs are likely remnants of a more noble formation, undoubtedly quarried to help build the modern highway in the Gorge in the 1940s and 50s. But they still give a sense of the natural environment that once existed here, and provide for an interesting shoreline along the river.

This USGS benchmark was placed in 1956, likely in conjunction with modern highway construction in the Gorge.

Look closely at these rocky mini-bluffs and you’ll see cliff-dwelling Gorge plants making a home, while red alder and Douglas fir are colonizing the rocky shoreline on both sides of Tunnel Point. Nature is making a valiant attempt to restore this spot, even if we humans are lagging in the effort.

How could the Tunnel Point Wayside be restored? For starters, the massive expanse of asphalt could be redesigned to restore green areas, with landscaping, trees, picnic tables, restrooms and perhaps a travel information center. After all, this spot is as much a gateway to the Portland metropolitan area as to the Gorge, given that access is limited to westbound travelers.

Next, a series of walking paths could be added along the little bluffs, providing a place for travelers to stretch their legs, and learn a bit about the Gorge. A wooden Oregon History sign is already mounted in the parking area, and could be restored to become part of an improved interpretive display and walking path system.

These improvements would provide for a welcome refuge for travelers arriving in the Portland region from points east, but what about travelers entering the Gorge from the west? Providing access to eastbound visitors would be a tall order, requiring some sort of overpass or tunnel to deliver visitors from the opposite side of the highway. The cost, logistics and visual impacts probably make this infeasible, unfortunately.

But for now, improving the wayside for westbound traffic would be a big step in the right direction. Since the wayside is within the highway right-of-way, improvements could be built by the Oregon Department of Transportation (ODOT) with highway funds, in conjunction with Oregon Parks and Recreation. Tunnel Point Wayside deserves this new lease on life, and travelers in the Gorge deserve to enjoy this unique perspective of the river and Gorge.

Postscript: after writing this article a few months ago, I ran across a “generic” roadside pullout design in the 2005 I-84 Design Strategy — a joint ODOT, U.S. Forest Service, Federal Highway Administration and Columbia Gorge Commission planning document that lays out the framework for future improvements to the highway within the Columbia River Gorge National Scenic Area. 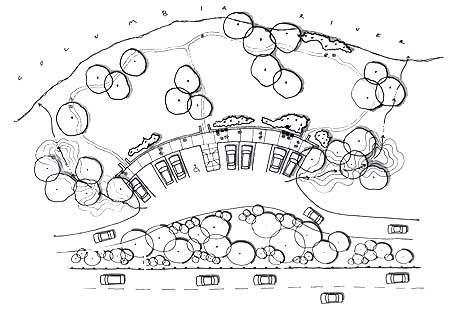 The schematic looks tailor-made for the Tunnel Point Wayside, and in this design, reclaims much of the parking area as a park with riverside loop trail. Though hard to see in this scaled-down version, the plan calls for just ten parking spots, with trucks obviously barred from entering (the truck stops in Troutdale are only a few miles further, after all). Most interesting are bio-swales on both sides of the pullout, draining the parking area and adding more green screening from the highway. A glimpse of what might be, perhaps?