Sometime in the past couple of years, a refrigerator-sized piece of basalt split from the cliffs above Horsetail Falls, tumbled across two switchbacks on Gorge Trail 400, and landed perfectly on a third, forming a handy bench that only Mother Nature could design – or did she?

The convenient boulder that recently appeared on Trail 400, above Horsetail Falls - the work of man or nature?

Rocks like this are constantly breaking loose from the walls of the gorge, usually far from the view or earshot of hikers. Through the relentless effects of water, and cycles of freeze and thaw during the winter months, bits and pieces of the stacked layers of basalt eventually break free, and join the enormous piles of talus that have accumulated beneath the cliffs over the millennia.

The new bench-boulder above Horsetail Falls is a bit chunkier than most, but tiny when compared to the house-sized boulders that are known to break loose on occasion. One infamous event near Wahclella Falls in the late 1960s was massive enough to send an entire subdivision of house-sized boulders into Tanner Creek, temporarily forming a small lake in the aftermath. 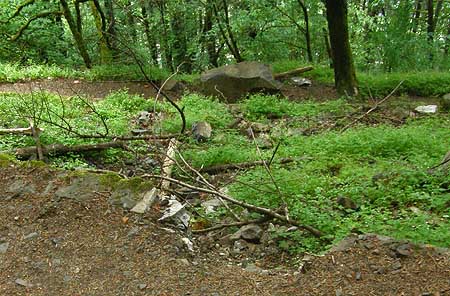 Looking down at the new boulder, the view is a bit more menacing, with a big bite taken out of the solid rock wall in the foreground, and a trail of debris, below.

Assuming that the big rock did land in the middle of the trail, there are a couple of miracles that suggest divine placement. First, the boulder missed the adjacent wall, though it took a sizeable bite out of a retaining wall further uphill (see photo, above). Second, the boulder managed to land parallel to the path, and just far enough from the rock wall to allow hikers to easily slip between… a rock and a hard place!

It’s possible that trail crews could have jimmied this massive stone into its convenient position, but unlikely. Just one cubic foot of solid basalt weighs in at a staggering 188 lbs, which means that this fridge-sized weighs at least 12,000 pounds — more than six tons!

Perfect for a trailside respite, the big rock bench is already a favorite of hikers

A more unnerving thought is the possibility of hikers actually witnessing nature at work, here, given the popularity of this well-traveled path nearly year-round. But, even with the scores of hikers walking by, there are plenty of quiet spells during the winter season, when this stone most likely made its move — and there’s also the dark of night.

However the big rock arrived, it has already become a popular stopping point for newbie hikers, puffing their way up the trail from Horsetail Falls, in search of Ponytail Falls. In this way, the big rock might just be Mother Nature’s way of tempting her most impatient species to stop and relax, if only for a moment.