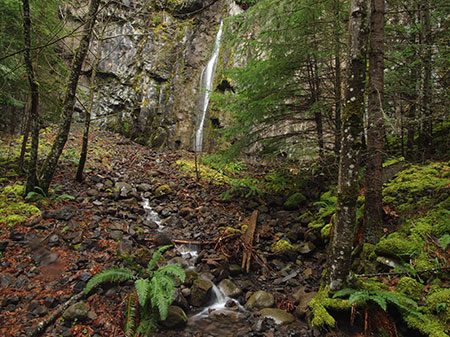 Time is running out on the Restore Warren Falls! project. This summer the next phase of the Historic Columbia River Highway (HCRH) State Trail project will begin construction of a segment that will pass right in front of the falls.

The new trail construction in the area is not simply an ideal opportunity to finally undo what the Oregon Department of Transportation (ODOT) did to this magnificent waterfall 76 years ago — it’s probably the only opportunity in our lifetimes.

In that spirit, I thought an update on the project and Warren Falls was in order — plus share a bit of a bombshell that was sent to me recently!

Checking in on Warren Falls

First, a quick visit to Warren Creek: in mid-April I made a couple visits to Warren Falls as part of my twice-annual Friends of the Gorge hikes. As has become the norm in recent years, the natural falls clearly flowed again this winter during heavy runoff that overwhelmed the diversion weir at the top of the falls. 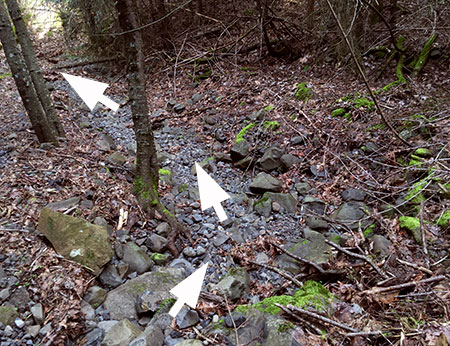 …and in this photo, where the overflow stream continued down the ancient creekbed

These regular overflows make more sense when you look at the condition of the weir — the following photos from the top of the falls show just how clogged the giant “trash rack” has become, and also how badly the upper lip of the rack has been exposed as the concrete diversion dam continues to erode:

Over its 76-year life the enormous weir has become twisted and clogged with debris, causing more overflows each year

The Friends of the Gorge hikers always marvel at the strange, unsettling scene of a dry waterfall. Like most who visit Warren Falls, many are also saddened by the idea that the ODOT could have been so cavalier in altering such a beautiful scene at Warren Creek so grotesquely.

While the original decision to divert the falls can arguably be blamed on the thinking of the era (late 1930s), I would submit that allowing this tragic mistake to continue to exist is equally cavalier and dismissive of the natural landscape at Warren Creek. Thus, my campaign to attach the burden of undoing the mess at Warren Falls to ODOT — and in particular, their looming state trail construction project that will soon begin in the area. 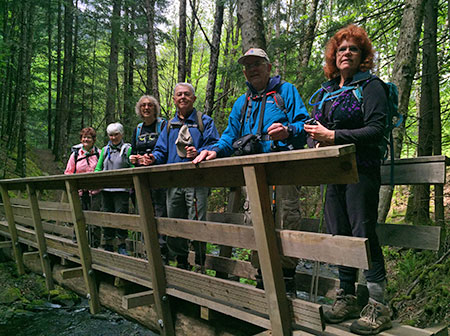 While researching Warren Falls over the winter, I finally found a definitive story on the official naming of the creek. The name “Warren” comes from Warren “Barney” Cooper, and early forest ranger in the Mount Hood area (and part of the Cooper family described in this previous article).

This Oregonian article documents (in the last paragraph) when Warren Cooper’s name finally became the official name of the creek in 1948, though it had been in unofficial use for years:

So, we now learn that Warren Lake and creek were once called “Warm Lake” and “Warm Creek”. Warren Lake is situated on a high, rocky shoulder of Mount Defiance, and shallow enough to be “warm” in late summer, so that could be the simplest explanation for this early name.

The name “Warren” appears on maps and early documents from well before this 1948 decision, so the timing of the article is interesting, especially so long after Warren Cooper’s death in 1920. Was the naming in 1948 simply cartographic housekeeping or an overdue recognition of a pioneering forest ranger by those who followed him?

As always, every answer brings a few new questions!

Friends of Warren Falls… are everywhere!

Since the Oregon Field Guide story on the Restore Warren Falls! project first aired the fall of 2012 (watch the documentary here), several anonymous “friends” of Warren Falls have quietly contacted me with offers to help. 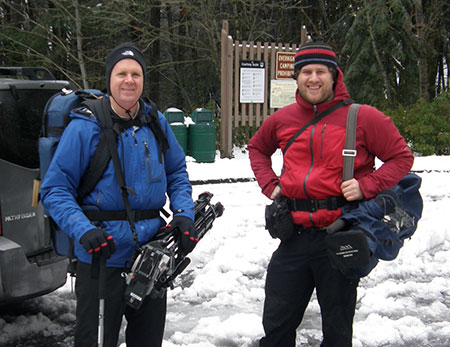 Most surprising among the proposals were offers to simply “monkey-wrench” the weir at the top of the falls to speed up its demise! While I’m sympathetic to both the frustration and impatience behind the monkey-wrenchers out there, I’m also concerned that tinkering with the weir might actually be illegal (though it’s hard to see how a decaying structure that no public agency will claim responsibility for could somehow also become the basis for legal action..?)

More importantly, I’m concerned that formally removing the weir and associated debris will become increasingly difficult if the structure is further compromised. I’ve therefore thanked the monkey-wrenchers for their passion, but encouraged them to be patient and allow the slow wheels of government to turn a bit further..!

Another piece of information that trickled in from an anonymous attorney and friend of Warren Falls is found in plain sight: in the Oregon Revised Statutes. Specifically, ORS 538.200, which exists solely to prohibit the diversion of “streams forming waterfalls near the Columbia River Highway” for “any purpose whatsoever”.

While quite clear in its intent, this might seem like a very general reference. But the statute (which was signed into law in the early 1900s, before the Warren Falls diversion) goes on to list each of the streams and waterfalls that fall under this protection — including Warren Creek, in ORS 538.200(26)! 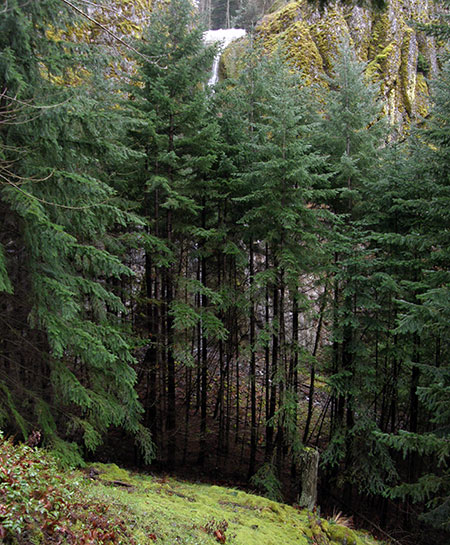 What does this new information mean? For starters, it means that ODOT — at the time, called the Oregon Highway Division — broke the law in 1939 when it blasted a diversion tunnel and erected a dam and weir to pipe Warren Creek away from its natural falls and streambed. That is quite clear.

What is unknown is whether the ODOT decision to defy the law in the late 1930s was brazen in its intent. As hard as that possibility is to believe, it is also very hard to believe the agency wouldn’t have known about the law, given that it had been enacted just a few years prior the Warren Falls diversion project being concocted in the early 1930s — and was specifically aimed at the state’s premier highway of the era.

What does it mean today? In my view, it means that ODOT now has BOTH a legal and ethical responsibility to undo what it has done to Warren Falls. That couldn’t be more clear.

For the past four years I’ve been beating the drum to connect the restoration of Warren Falls to the massive, multi-million dollar Historic Columbia River Highway state trail project, without much success. So far I have:

• unsuccessfully pitched the cause to three of the premier conservation groups active in the Gorge, including on-site tours, but did not persuade any of the groups to adopt the cause.

• unsuccessfully made the case twice before the Historic Columbia River Highway steering committee, with some sympathetic interest from the committee, but a deep reluctance to seriously consider the idea. It was added as an item “for consideration” — but later dropped due to cost concerns.

• successfully pitched the idea to the producers of Oregon Field Guide story, and while ODOT staff involved in that effort were sympathetic to the state of Warren Falls, the publicity created by the story did not change their recommendations to their steering committee for any further consideration of restoring the falls.

• posted a string of articles on this blog and started a Facebook group two years ago to continue to rally the cause, but these efforts haven’t made a noticeable dent at ODOT, either.

We are now in the end game, and I don’t think the Warren Falls will ever be restored if the work doesn’t happen when ODOT has heavy equipment in the area later this year. After that, it will most likely be up to Mother Nature, and that’s would be such a sad commentary to future generations when they judge the state of the world we choose to leave them.

From the beginning, I have argued that restoring the falls isn’t about money, but rather, about responsibility. ODOT created the mess that now exists at Warren Creek, and for a whole variety of safety, ethical, environmental — and now, legal — reasons that I’ve argued over the years, it’s time for the agency to own up to their responsibility. 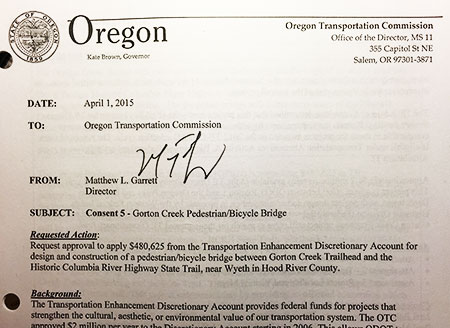 No fooling, ODOT has $2 million annually in a “contingency” fund for exactly the kind of work that restoring Warren Falls would entail — and just allocated another half-million dollars to cover additional costs for the state trail project in the Warren Creek area.

It turns out the money has always been there, too. On April 1, ODOT quietly pulled nearly a half-million dollars in “contingency” funds into this latest phase of the state trail as a consent item before the Oregon Transportation Commission. The new money is for a previously unplanned bridge over nearby Gorton Creek, a worthy addition at the east end of the current phase of construction. Warren Falls could be restored for a fraction of that amount – if only the will and sense of agency responsibility at ODOT existed.

My next efforts will focus beyond ODOT, given my fruitless efforts to work with the agency. At the top of my list of arguments is the newly discovered fact that the agency violated state law when they built the project in 1939 — underscoring the notion that ODOT has both ethical and legal obligations to own up to restoring the falls. The agency clearly has funding available for worthy efforts like this one if the desire exists. I will be making that argument, as well.

There’s still time to realize this vision… but not much.

I’ll post a follow-ups to article with more details soon, and especially how you might be able to help get the restoration of Warren Falls unstuck from our state bureaucracy. Most of all, a big thanks to all who have offered to help — and as always, thank you reading this blog and caring about Mount Hood and the Gorge!

2 thoughts on “An Overdue Warren Falls Update (…and a bombshell!)”