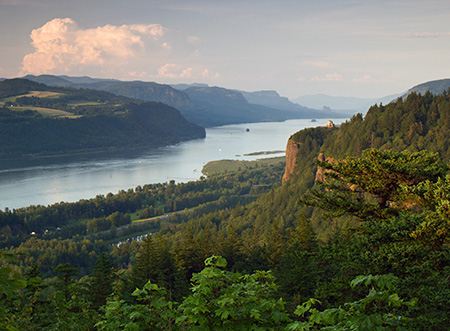 If you’ve been following the progress of the Oregon Parks and Recreation Department’s (OPRD) new Gorge Recreation Plan, you may have commented during the earlier, fairly conceptual phases of the project. On April 24, the OPRD gave us the first real look at on-the-ground specifics with a first draft of the plan.

At first glance, the new plan has a lot to like, and it is crucial for trail advocates to weigh in to support this effort now! Why? Because hiking is being portrayed by a few land managers as “the problem” in the Gorge. Ironically, this is because the state and federal land agencies that manage the Gorge have failed to keep pace with the rapid growth in recreation demand over recent decades, and some trails have (predictably) suffered from overuse as a result.

Switchback on the Angels Rest Trail coming unraveled from overuse

Yes, trails like Angels Rest and Eagle Creek are wildly overcrowded during peak hiking periods, and they are most certainly showing the wear. But the answer isn’t to lock the public out of the Gorge! Instead, expanding opportunities with a few new trails and better ways to use existing routes is the realistic solution. But it will take the U.S. Forest Service, Oregon State Parks and Oregon Department of Transportation working together to make that happen. The draft Gorge Plan makes a big step in this direction, and it deserves our support.

What’s in the plan?

The 20-year update to the Gorge Recreation Plan was kicked off last fall with an assessment of existing recreational, cultural and natural resources currently found on State Park lands in the Gorge, and an inventory of natural or scenic features that should be protected from recreation-oriented improvements.

From this basic understanding of existing conditions, the State Parks staff has since assembled a detailed set of project proposals that attempt to fill in some of the facility gaps in the system. The overall vision is framed in a west-to-east schematic (sample shown below) that describes the assets currently found at each State Park in the Gorge, as well as proposals to enhance each of the parks.

Once you figure out how the schematic works, it’s an efficient way for ordinary citizens to really understand what is being proposed by the OPRD. You can download a PDF of the schematic on this OPRD web page and review it in detail. The final version of this document will guide park decisions for decades to come, so it’s very important to give OPRD your input now!

In each case, new trails, restrooms, bike/hike campsites and other major improvements that would enhance quiet recreation in the Gorge are proposed. There is a lot to like in these proposals, and the State Parks staff have not only put a lot of creative thought in assembling them, but have also been listening to recreation advocates seeking to make the state parks more reflective of current recreation demand — both in volume and variety. You can download a PDF of a detailed poster describing these proposals on this OPRD page.

First, some exciting news: several trail concepts proposed on this blog have made it into the OPRD proposal for the Gorge! Special thanks go to readers who have weighed in with support for these proposals – your voice matters. Other trail concepts came from OPRD staff and the newly formed Gorge Recreation Coalition, a broad advocacy group consisting of several non-profit organizations focused on quiet recreation in the Gorge.

The following are highlights from the major trail proposals included in the draft plan, and all can be downloaded from this OPRD web page. This map key will help decipher existing versus proposed facilities: 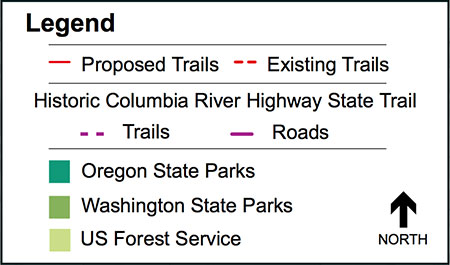 Including this trail is a nice step forward, but the concept should more fully embrace the historic nature of the old road. After all, this rustic old road pre-dates the historic highway, and was once how visitors accessed the former Chanticleer Inn (below) from a rail stop at the Rooster Rock Cannery. The Inn was one in a string of roadhouses that once defined tourism in the Columbia Gorge.

Therefore, this trail should be known as the “Chanticleer Grade Trail”, to keep this important history alive, with interpretive signage along the route designed to give hikers a sense of what the trip up the old road must have been like more than a century ago. Here’s a recent trip report that gives a sense of the potential for this trail.

Next up is a proposed trail connecting the Bridal Veil Falls trail to Angels Rest. The concept is a good one, to the extent that it might take some pressure off the heavily impacted Angels Rest trail. It also traverses public lands currently out of reach to most visitors. Unfortunately, it wouldn’t have the direct benefit that [url=]the Angels Rest Loop[/url] proposal on this blog would have, and this option requires more trail to be constructed. 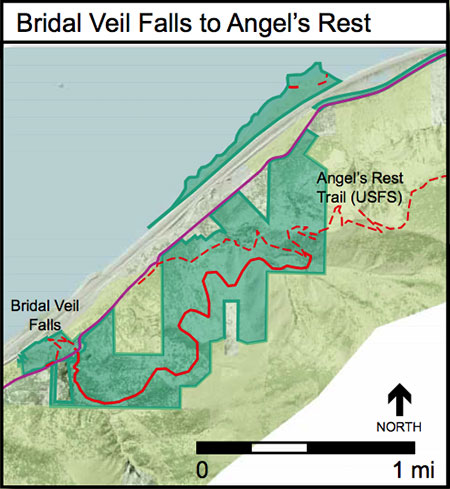 The Bridal Veil proposal also seems to leave out a couple of prime opportunities along Bridal Veil Creek, including the possibility of a Bridal Veil Canyon Trail described in this blog, and a universal access trailhead and trail located at the old Bridal Veil Mill site, just downstream from Bridal Veil Falls. The latter was proposed in the Gorge Coalition comments on the draft plan. Both trail improvements should be added to the draft plan.

Moving eastward, another important trail proposal in the draft plan would fill a gap in Trail 400, east of Ainsworth State Park. This missing link would allow for some long loop hikes for hikers seeing a challenge, and especially for campers staying at the Ainsworth campground (where a number of additional improvements are proposed).

Further to the east, the draft plan proposes to include the Viento Bluff Trails described in this blog. This would be a series of straightforward, easy-to-build connections that would create a network of family-friendly loops from the Viento Campground. 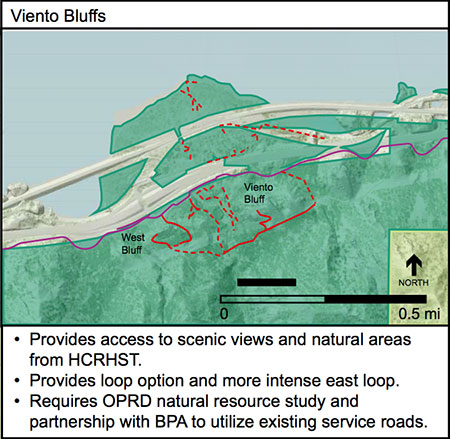 The “existing trails” shown in the Viento area on the draft map are a bit confusing, as some of the trails don’t actually seem to exist, but the general idea for the area is captured, and this ought to be a high priority for OPRD. The easy access and proximity of Viento State Park to the Portland area also make these proposed trails prime candidates for volunteer labor.

Finally, the new trail proposals include yet another concept from this blog, the Mitchell Point Loop Trail. While the eastern loop from the blog version is dropped from the State Parks proposal, the western loop is retained, and this would be a dramatic enhancement to existing the Mitchell Point trail.

What’s missing from the Mitchell Point proposal? Notably, a future for the nearby Wygant and Chetwoot trails, routes that are rapidly disappearing from lack of maintenance and some rough treatment by BPA crews. A portion of the Wygant Trail shows up on the Mitchell Point map, so at least the draft plan is not proposing to formally abandon this route, but it does deserve to be called out for restoration.

You can review all of the proposed trail enhancements in PDF form on this page on the OPRD website.

How to be Heard

Oregon State Parks staff will be holding a public meeting on Wednesday, April 30 at the Corbett Fire Station. Despite the short notice and distant location for most Portlanders, it’s important to weigh in. If you can’t make it to the open house, then be sure to weigh in via the Gorge Parks Plan project website. The website is set up in blog format, so simply scroll down to comment at the bottom. The OPRD staff has thus far proven to be interested and responsive to public feedback on the Gorge Parks Plan, so your comments will be considered in a meaningful way.

The OPRD goal for the third set of public meetings is to roll out their draft Gorge Plan proposals and hear public input, especially on the prioritization of the proposed park improvements.

State Parks staff have posed the following questions for the public to consider:

1. Of the improvements proposed, what do you see as priorities?

2. If you could see only one of the proposed improvements implemented, which would it be?

3. Are there proposed improvements that you think should wait?

4. Is there anything you would like to see that hasn’t been captured in the proposals?

Thus far, the OPRD meetings have been lightly attended, but those who have taken the time to weigh in have been heard. It’s worth your time, and this is a rare opportunity to shape the future of recreation in the Gorge. Remember, this is a 20-year planning window, and the new Gorge Parks Plan will set the stage for how parks are manage for decades to come.

Please consider taking the time to weigh in!