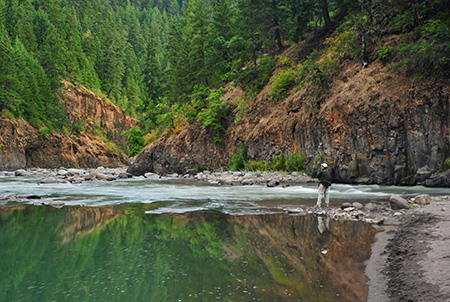 In my last post, I alluded to some pending good news on the WyEast beat, and in this article I’ll share a trio of pleasantly cool developments for our otherwise scorching summer:

Starting off with the big news, the folks behind the Punchbowl Park project learned in late June that they had been awarded a State of Oregon grant of $470,000. These funds will make it possible for Hood River County to acquire the 103-acre Punchbowl Park site in partnership with the Western Rivers Conservancy.

This is a huge step forward for this citizen-led movement, a major grass-roots effort guided by Heather Staten of the Hood River Valley Residents Committee (HRVRC). Now that the future of the site is secure, Heather and her organization will be working with the county to begin building a recreational trail network through the new park for the public to enjoy.

Much more work lies ahead for Punchbowl Park, and I’ll continue to post updates here on new developments and opportunities to get involved in the trail building over the coming years. Kudos to Heather and those who pitched in for the tireless work that made this happen. Bringing this area into public ownership is a once-in-a-lifetime opportunity, and one that will pay off for many generations to come!

You can already explore Punchbowl Park in its undeveloped state now by following the maze of user trails that already exist there. You will likely notice signs of recent logging — part of an operation to remove diseased trees from the forest in hopes of limiting their spread. The long-term plan for the new park is to let nature take over, and allow the forest to recover to a more natural state after a century of timber harvesting.

Warren Creek canyon (and falls) from across the Columbia

For a second bit of cool news, we move west to Warren Falls. In mid-July, I sent a “Hail Mary” plea to local legislators in the Hood River area asking for their (divine?) intervention to somehow prod the Oregon Department of Transportation (ODOT) into decommissioning the Warren Creek diversion tunnel and restoring Warren Falls. I’ve posted several articles on this proposal (as well as this Oregon Field Guide story) in hopes of doing this needed restoration work when the state will have heavy equipment in the area as part of the next phase of the Historic Columbia River Highway (HCRH) State Trail, which will soon cross Warren Creek.

My plea for help was answered promptly and with enthusiasm by State Senator Chuck Thomsen of Hood River. Senator Thomsen agreed to me at the Starvation Creek Wayside early one morning last week for an inspection of the Warren Falls site and a briefing on my proposal to restore the falls. After our tour, he offered to write a letter to both ODOT and the Governor’s office asking them to put Warren Falls on their to-do list. Boom! 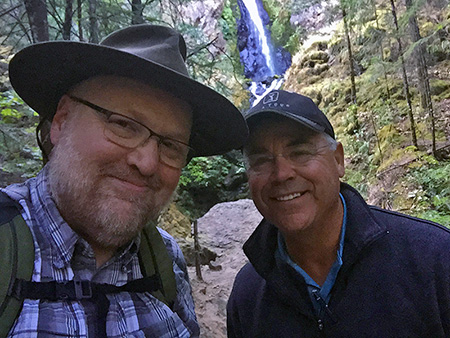 The author with Senator Chuck Thomsen at Warren Creek

More to come, but simply contacting a legislator has already triggered a call from an ODOT surrogate, essentially asking me to cease and desist in my efforts. I assured them that I had no desire to delay the larger state trail project, but still believe the agency should (and can) do right by undoing their illegal diversion of Warren Creek — and restoring Warren Falls in the process.

I’m convinced that if ODOT channeled the spirit of Samuel Lancaster when he designed the historic highway a century ago, they would easily discover both the will and funding needed to make this happen. And if they do, Sam Lancaster will surely approve — wherever he might be!

If you’re interested in more detail, here’s a (large) PDF of my Hail Mary! letter to Senator Thomsen.

Palmer Glacier gets a Reprieve

Like tractors on a corn field, snowcats plow (and salt) the Palmer Glacier for summer skiers

Five years ago, I posted this article challenging the Timberline Ski Resort on their practice of “conditioning” the Palmer Glacier with the equivalent of 500 tons (picture 500 pickup loads) of salt on the glacier each summer.

To defend the practice, the resort points to water quality testing downstream showing only “reasonably elevated levels” of salt in the tributaries that feed into the Salmon River, as if there is something reasonable about purposely pouring salt into one of our premier rivers. The Salmon River is not only treasured for its epic waterfalls and rugged gorge, it’s also a wild and scenic river and among the few salmon and steelhead streams in the Oregon Cascades with no downstream dams to block fish migration. There’s a lot at stake, here. 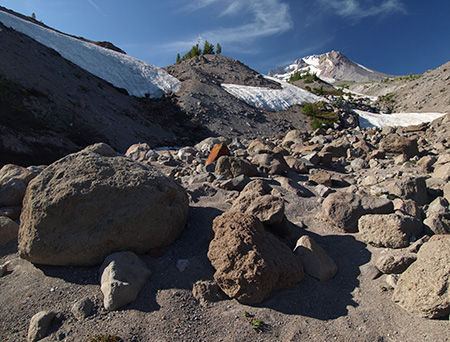 The Forest Service, meanwhile, is also of the “well, let’s see what happens” mindset, and officially permits the Timberline resort to keep dumping tons of salt on Mount Hood most fragile glacier. And yes, it’s still a glacier in name, though you may have noticed that the official media term coming from both the Timberline Resort and the Forest Service is the dismissive “Palmer Snowfield”. I can only guess the thinking behind this, but it’s hard to imagine it not being an attempt to downplay the impacts of salting the glacier.

Meanwhile, the Palmer Glacier continues to shrink, along with the rest of our Cascade glaciers in this period of global climate change. The Timberline Resort actually posted a letter to President Obama on their website proclaiming their “strong support for policies to address climate change”, all the while purposely accelerating the melting of their bread-and-butter glacier. Given the contradiction, it’s fairly easy to differentiate the empty rhetoric from the short-term profit motives.

How salty is this runoff from the Palmer Glacier? Enough for the Timberline Resort to be on the defensive, apparently. 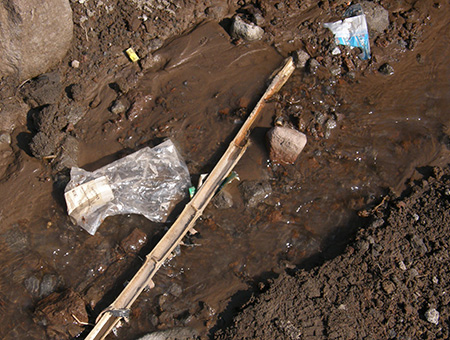 The greatest tragedy is that we own the land and the glacier, not the resort. They’re simply leasing the space. So, after the glacier is gone, we’ll own the polluted alpine slopes left behind by the salting practice — as the effects of salt pollution are long-term in nature, and of little concern for ski resort balance sheets or Forest Service concession permits.

So, where’s the cool news in this story? Just that the Timberline resort is closing down the Palmer ski season this weekend — a full month before their advertised “June through Labor Day” summer season concludes.

The Palmer Glacier won’t miss those snowcats, skiers or tons of salt this August!

This bit of good news for the Palmer Glacier and Salmon River is real: it translates into hundreds of tons of salt that won’t be spread on the glacier over the month of August this year, and that in turn equals less salt in the river and fragile alpine slopes in a dangerously low water year. It might even mean less melting of the glacier than might happen otherwise.

So, it’s cool news of a sort… and might just help keep the Palmer Glacier around just a bit longer.

8 thoughts on “Cool news in the summer heat!”