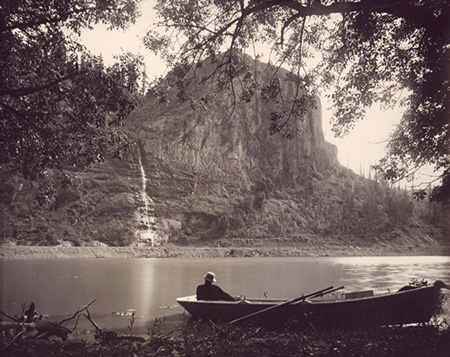 “Palisades, Columbia River” This 1880s scene captured by Frank J. Haynes, official photographer for the Union Pacific Railroad. Crown Point (then called “Thor’s Heights”) and its lacy waterfall are the backdrop for what was known as Echo Bay in the early days of settlement.

Though seen by far more travelers than the famous Mirror Lake on Mount Hood, a stunning lake by the same name in the Columbia Gorge is unknown to most. That’s because most of the visitors to the “other” Mirror Lake, in plain sight at the foot of Crown Point, are usually speeding by on I-84. Stealing a glimpse of this lovely lake while dodging the steady stream of Walmart trucks that race through the Gorge is risky business!

This “other” Mirror Lake also has a deeper identity crisis: after all, it has only been around since the modern highway through the Gorge was built in the 1950s, and sliced off what was once an inlet to the Columbia to form the shallow lake we know today. 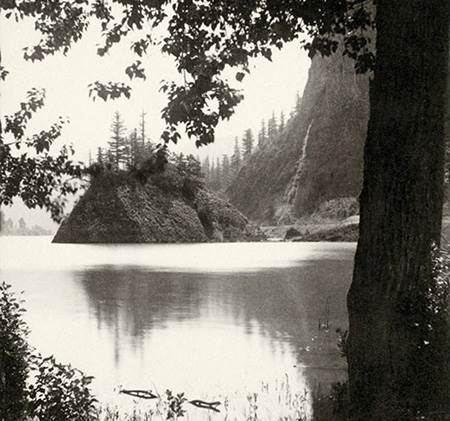 When the earliest photographers were visiting the Gorge in the 1880s, the inlet was known as Echo Bay, formed where Young Creek (the stream that flows from nearby Shepperd’s Dell) meandered through extensive wetlands, and finally into the Columbia River.

The idyllic scene of Echo Bay in the late 1800s was framed by stately stands of Black cottonwood and Oregon ash, a rocky basalt island with a gnarled grove of Oregon white oak, flocks of ducks and geese and a wispy waterfall cascading down the massive cliffs of Crown Point, above. All of these scenic ingredients are still found there, today, albeit hemmed in by roads and railroads.

With an 800-foot buttress on one side and the main steam of the Columbia River on the other, Echo Bay was the path of least resistance when the railroads came to the Gorge in the late 1800s. Today’s Union Pacific tracks generally follow the historic railroad alignment, traversing the base of Crown Point along the south shore of the bay, and passing within a few feet of Crown Point’s waterfall.

This early 1900s topographic map shows Echo Bay as it existed until World War II (under the words Rooster Rock). Crown Point isn’t labeled on this early map, but is the marked by the sharp bend in the historic highway directly adjacent to Echo Bay.

Another early map view, this time from around 1900, showing the steep access road that connected the cannery at Rooster Rock to Chanticleer Point and the historic Columbia River Highway on the rim of the Gorge.

Later in the 1800s, a salmon cannery opened near the mouth of the bay, at another small cove at the western base of Rooster Rock (the cannery was also located near the spot where the Lewis and Clark Expedition had camped on November 2, 1805 on their westward journey). Until the late 1940s, the only land access to the cannery was along a narrow dirt road that descended from the rim of the Gorge at Chanticleer Point (explorers can still follow that old road, and state parks planners are considering reopening it as a trail in the future).

Rooster Rock and salmon cannery in the early 1900s.

Few travelers used the old cannery road, so for more than sixty years of the post-settlement era in the Gorge, Echo Bay was most seen from train windows, or glimpsed from the high cliffs along the Historic Columbia River Highway after it was completed in 1916.

By the end of World War II, the old highway was deemed too slow and narrow for the 20th Century and Americans were increasingly interested in traveling by automobile, not rail. So, by the 1940s a massive project to build a river-level, modern highway through the Gorge was underway.

The modern highway through the Gorge was built in a nearly straight line on twenty feet of rock fill across the lowlands below Crown Point. The elevated road kept the highway surface above flood levels, but also served as a dike, cutting off Echo Bay from the river and forming the strong of small lakes we know today.

1920s view from Chanticleer Point with the approximate route of the modern highway shown as the dashed orange line, along with other landmarks in the Gorge.

At some point in the 1950s, the largest of these lakes became known as Mirror Lake, though the origin of the name is unknown. The newly created Mirror Lake joined a very long list of lakes with that name, and notably a very famous cousin that mirrors Mount Hood.

While the changes to the area that came with the 1950s construction of the modern highway through the Gorge were mostly in the negative column for the natural environment, the convenient new road access did allow ODOT (which once operated our state park system) to build a large new state park at Rooster Rock in the mid-1950s.

This 1954 map shows the (then new) modern highway and Mirror Lake of today, though the lake had not yet been named the Rooster Rock interchange and park developments had not been constructed.

Land acquisition for the new Rooster Rock State Park began in 1937, and continued well beyond the development of the park, with a total area of nearly 900 acres by the mid-1980s.

The new park included its very own interchange on the highway, though it was built at the cost of pushing the eastbound exit ramp over a filled area of the lake. Hundreds of paved parking spots were build along a half-mile stretch of beach that once lined the Columbia River here, and Rooster Rock became one of the most heavily-visited state parks in Oregon.

The brand-new interchange and Rooster Rock State Park as it appeared in the late 1950s, adjacent to Mirror Lake.

Today, the beach (and the accompanying crowds) at Rooster Rock have mostly eroded away, in part because of changes in dredging of the shipping channel. Yet, one remnant of the former Echo Bay can still be seen here, as a small, unnamed cove at the eastern foot of Rooster Rock that is the truncated mouth of Echo Bay, cut off by the modern highway. The little cove now hosts a boat dock, and is easily seen by eastbound highway travelers.

The boat docks in the remnant of Echo Bay that still survives north of the highway, below Rooster Rock (the cliffs of Crown Point are in the background; photo Oregon State Pqrks).

Young Creek still flows into Mirror Lake, but is now channeled through a culvert under the highway to the small cove by Rooster Rock, where it then flows into the Columbia River.

For more than a century, the lowlands along Young Creek and Echo Bay were farmed by early settlers in the area, but in recent decades the entirety of the original Young Creek wetlands adjacent to Mirror Lake have come into public ownership as part of Rooster Rock State Park.

1950s view of the Young Creek lowlands east of Mirror Lake and the (then) new Highway 30.

The State of Oregon has since been restoring the Young Creek lowland to its former natural state as a wildlife reserve, with a lush mosaic of tree stands, meadows, marshes and ponds. Mirror Lake, itself, has become a surprising haven for waterfowl, with flocks of geese, ducks and white egrets resting and nesting there — a surprising and welcome twist in an area so heavily impacted by human activity over the past 150 years.

While a lake flanked on one side by a freeway and a railroad on the other might not seem like a promising hiking destination, the views of Mirror Lake are just as spectacular today as they were when the first photographers visited Echo Bay in the 1880s.

You can visit the modern lake by taking the eastbound Rooster Rock State Park exit. The park access road curves left, across the freeway overpass. Instead, park on the gravel shoulder on the right, where a gated service road drops to the lake.

You can follow the service road and explore along the lakeshore in about the same spot that Frank Haynes captured the iconic view at the top of this article in 1885. All of the land here is public, so feel free to explore and reflect on both the long human history and natural beauty of this remarkable spot!

4 thoughts on “The Other Mirror Lake”