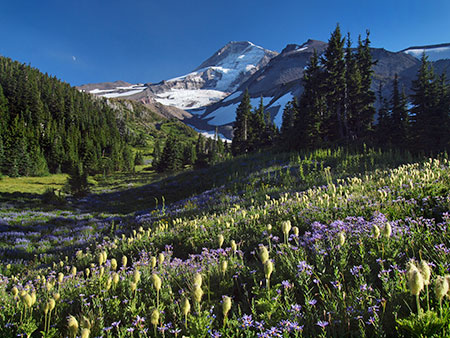 A friend alerted me last week to some unexpected publicity for the Mount Hood National Park Campaign: a mention in Backpacker Magazine’s special National Parks issue! If you’ve followed the blog for awhile, this isn’t the first time the park idea for Mount Hood has made the national media – Sunset Magazine suggested included the mountain in a similar piece a few years ago, as covered in this blog article.

I should confess to not reading this magazine much, as it as always seemed a bit fluffy and gear-obsessed. But while I’ll excerpt the Mount Hood mention here, it’s definitely worth picking up a copy of the National Park issue (August 2016 issue, on newsstands now). 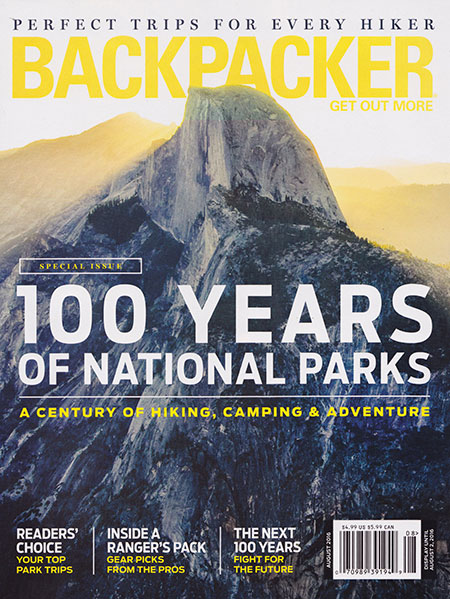 There are surprisingly thorough articles in this issue of Backpacker on the state of our National Parks, covering everything from the worrisome lack of diversity among parks visitors to the impacts that we are all seeing as our public lands grow increasingly popular. There’s even a piece on Interior Secretary Sally Jewell’s 21st Century Conservation Service Corps, a new effort to reboot the spirit and scope of FDR’s Civilian Conservation Corps in our time.

The Mount Hood National Park mention comes way back on page 102 of the magazine. Four future parks are profiled as “top contenders” for joining the park system, including our own Mount Hood (and Columbia River Gorge), Driftless Rivers in the upper Midwest, Upper Bald River in Tennessee and Maine Woods, where National Monument status seems closer than ever after years of determined effort. 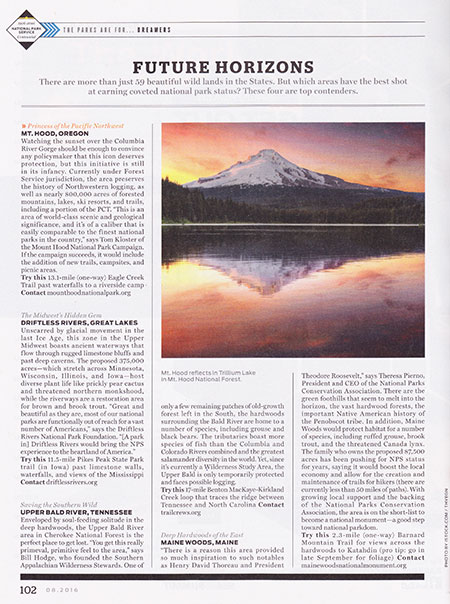 Mount Hood at the top of the list! The “Princess of the Pacific Northwest”

The article suggests the Eagle Creek trail as the best pick for exploring for new visitors. It’s also a good choice for underscoring the connection between Mount Hood and the Gorge, with the Mount Hood Loop the new national park together. 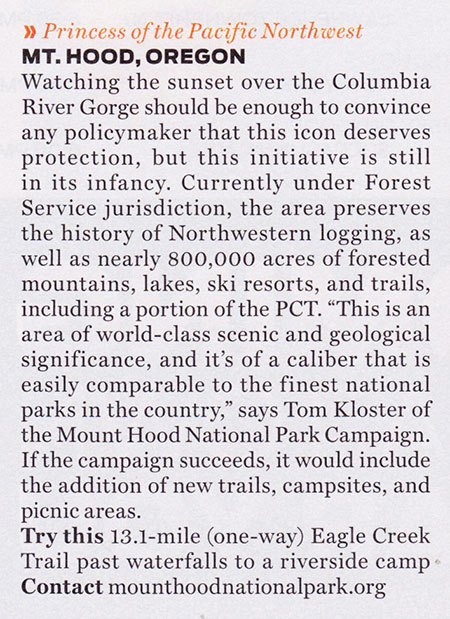 Sure, you can read about Mount Hood here, but this issue of Backpacker is worth picking up, with several good articles on our National Parks

But what would the best pick for an alpine hike have been? Most likely the short, popular trail to Mirror Lake or maybe something near Timberline Lodge, as the south side does seem to be the default for national media coverage. But local hikers would also look to McNeil Point, Elk Cove, Cooper Spur or Gnarl Ridge as the finest Mount Hood trail experiences.

And as much as Mount Hood is (deceivingly) serene and lovely in the photo from Trillium Lake, I would have picked one of the more rugged sides for the article, like the towering west face from Lolo Pass… 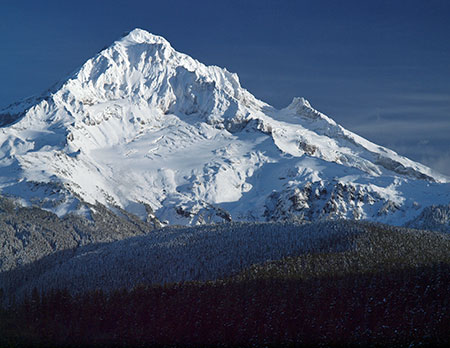 …or the rugged north face from the Eliot Glacier moraine… 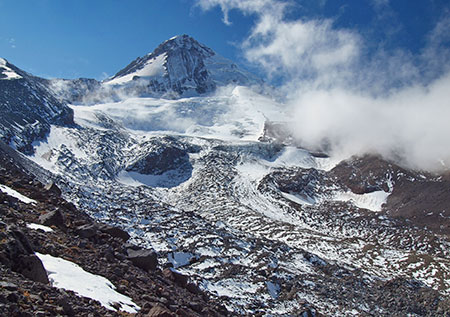 “Princess of the Pacific Northwest” showing her wild side (Eliot Glacier)

…or even something lesser-known, like Badlands Basin on the east side, in Mount Hood’s ran shadow… 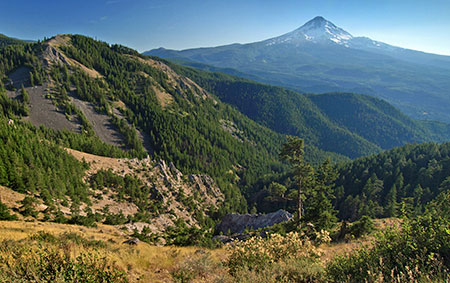 …but those images can wait until Backpacker Magazine profiles Mount Hood as the NEWEST national park in the system, one that finally protects the Princess of the Pacific Northwest” for all time!

In other media mentions, the Oregonian ran this “what if” piece on national parks that didn’t happen a couple weeks ago. It includes an interesting (if incomplete) history of the idea for Mount Hood, but oddly it makes no mention of the Gorge, which came very close to national park status when the Gorge Act was coming together in the 1980s.

Unfinished business, to be sure… but an idea whose time will come!

‘Tis a lesson you should heed

If at first you don’t succeed