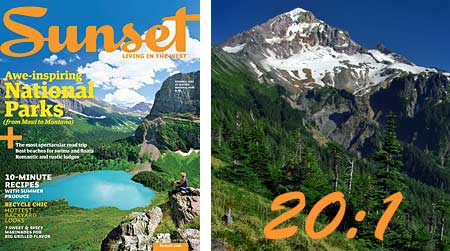 As part of their August 2010 feature on National Parks, Sunset Magazine gave a nod (of sorts) to the Mount Hood National Park Campaign! The surprise article explained a mysterious round of phone tag that I played with a Sunset writer in late July (though I never actually connected with her). As part of the cover story, Sunset gave odds on “Our Next National Park?” Here’s what they had to say:

8:1 – Mount St. Helens National Volcanic Monument, Washington – also under study, in this case by a citizens committee that may recommend bumping it from failed USFS management to National Park Service protection

20:1 – Mount Hood National Forest, Oregon – “A labor of love by a Portland city planner, this campaign faces a couple of roadblocks, the main one being it’s similar to what’s already in the NPS portfolio (hello, Mt. Rainier!)

100:1 – “Ancient Forest”, Northern California/Southern Oregon – “Another quixotic cause from a lone visionary, this 3.8 million-acres swatch would link ecosystems to help preserve species… but it’s a long shot.”

Twenty-to-one? I like those odds! The article also included a link to the campaign website, so kudos to Sunset for the free publicity, skeptical as they may be!

Of interest to me in this bit of lighthearted journalism is the old “parks as museum samples” canard that comes through — we’ve already got Mount Rainer, and it’s interchangeable with any other volcano in the Cascades. Next!

Well, that mindset actually dates back to Gifford Pinchot, and a few other early conservationists, who had no way of knowing that by the end of the 1900s most of the forests of the Pacific Northwest would be laid low, or that 10 million people would live within a few hours drive of the big Cascade peaks, looking for recreation, drinking water and a piece of what once was in America’s rainforest region.

Fortunately, the new national parks movement is redefining why we need more parks, and helping move beyond a museum collection mindset and toward a more holistic vision of ecosystem protection and restoration for all sites of national significance. With a little luck, Sunset Magazine will be featuring a new Mount Hood National Park on its cover in a few years, too.