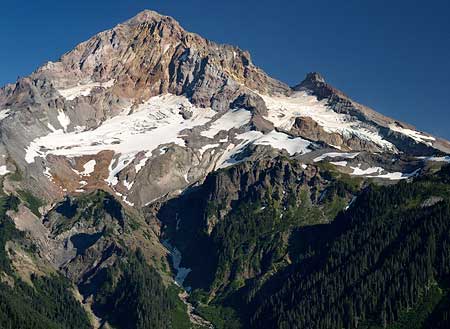 Today, Bald Mountain isn’t entirely bald, having grown a dense forest of noble fir along the crest and northern slopes over the past half-century. Yet, it was in the 1970s, when the Timberline Trail was rerouted to lead hikers across the steep, open meadows on the south slope of the mountain, that hikers became familiar with Bald Mountain. Today, this spectacular traverse continues to provide one of the most popular, exhilarating sections along the classic loop hike.

Though most visitors to Bald Mountain keep to the Timberline Trail, you can still follow the historic old path that leads to the former lookout site, with its magnificent, close-up views of Mount Hood. Thanks to the quiet efforts of a few anonymous volunteers over the decades, the trail remains open and lightly maintained, with only an occasional log to step over along the way. 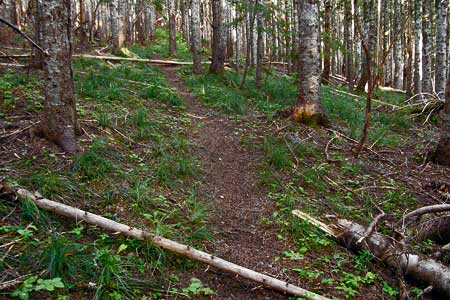 As the old path climbs toward the summit, hikers find themselves in a dense, young forest, and have to use their imagination to picture the open slopes of beargrass — with no forests — that existed when the first lookout was built on “Bald” Mountain more than a century ago.

Along the old trail, hikers will also spot blazes on the few trees that stood at the time of the former lookout tower. These blazes mark most historic trails (see this recent article on blazes) in the Mount Hood area, and confirm that the present alignment of the summit path to Bald Mountain dates back to at least the World War II era, and likely before. 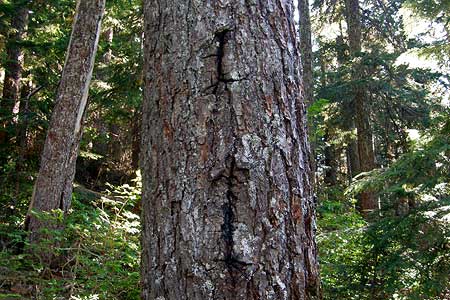 A look at the 1911 USGS map of Mount Hood (below) shows that a “lookout” stood on Bald Mountain long before roads crossed Lolo Pass, and decades before the Timberline Trail was built. The early lookout structure was likely no more than a wood platform, later replaced with a conventional lookout tower. Interestingly, the Beaver Lakes shown on the map have since faded away, too, filled in with forest: 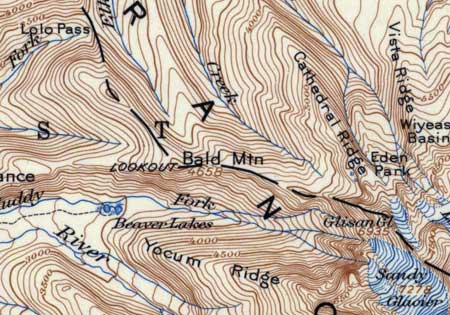 The 1946 USGS map of the Mount Hood area (below) is the last to show a lookout on Bald Mountain (and the Beaver Lakes), but in the intervening years from the 1911 map, the Timberline Trail and Skyline Trail had been completed, with both routes passing just below the lookout. 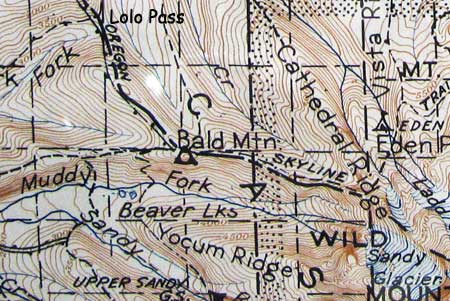 In fact, it’s likely that the section of Skyline Trail from Lolo Pass to Bald Mountain was originally built for lookout access, since the trail over Lolo Pass was among the earliest built in the area, and in fact, followed an ancient Indian route connecting the Sandy and Hood River valleys.

The alternating ticks shown along the dashed trail segments on the 1946 map indicate a telephone line along the route. Today, these routes often have ceramic insulators still attached to trees, and on this route further suggest that this section of trail was originally built with the lookout in mind. The route is now part of the Pacific Crest Trail, which replaced the old Skyline Trail, and remains one of the best approaches for hiking to Bald Mountain.

Fire lookouts in the Pacific Northwest followed a few standard designs beginning in the 1930s, after much improvisation in the early lookout designs that were built through the 1920s. The Bald Mountain lookout probably followed this evolution, with some sort of simple platform beginning at the turn of the twentieth century, and later, a more substantial structure built to Forest Service standards.

We have a much more exact picture after June 1944, when archived Forest Service documents show a new lookout was designed, apparently to replace an existing structure on Bald Mountain. The following are samples from the 1944 architectural plans for Bald Mountain. There are no clear records of when this lookout was removed, but it was likely in the late 1950s or 1960s, when hundreds of lookouts were viewed as outmoded by the Forest Service and destroyed. 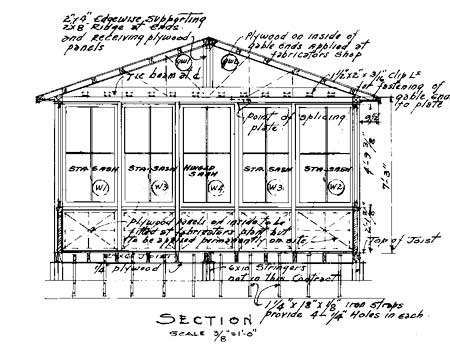 The cab — or cabin — in the 1944 designs for Bald Mountain is a 14×14 foot structure (above) that would closely resemble the surviving cab on the Devils Peak lookout, just to the southwest of Mount Hood in the Salmon-Huckleberry Wilderness. This simple design featured five windows per side and a low, pitched roof.

Inside the cab (below), the living space was organized around a Osborne fire finder, located in the center of the floor, surrounded by a wood stove, table, kitchen, storage cabinets, shelves and bunk. A catwalk wrapped around the outside of the cab, allowing lookouts to maintain the windows, raise and lower shutters and haul firewood and supplies up from below with pulleys. 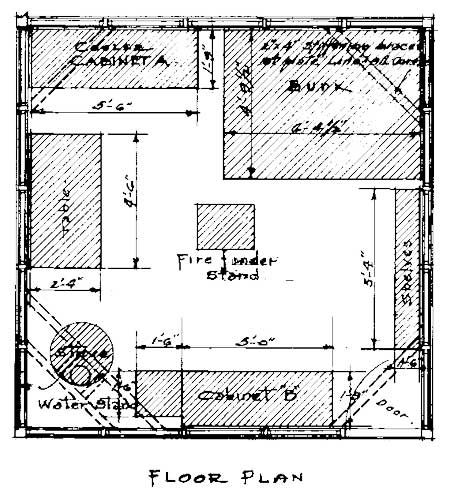 The 14×14 foot cab rested atop a 43-foot wood-frame tower (below), complete with a spiraling stairway that ascended within the tower uprights. Though the tower was anchored directly to the ground, the main stabilization came from guy wires anchoring the tower to concrete footings in four directions. 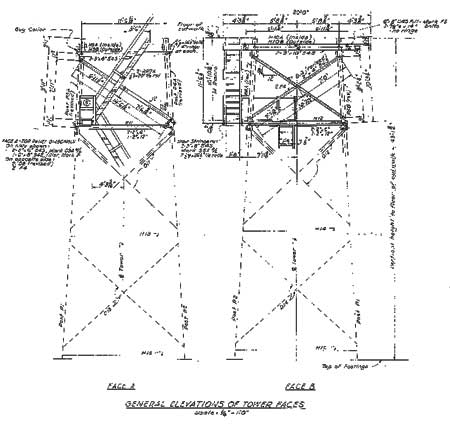 The most remarkable aspect of this tower (and many others) is the fact that most of the materials were carried to the site over trails using livestock. That included the cut lumber, concrete, construction hardware, fixtures and windows — an amazing feat when you consider this was repeated dozens of times at lookout sites around the region.

The lookout plans for Bald Mountain also contain one “standard” element that wasn’t so standard, at least compared to other lookouts in the vicinity: a garage and storage shed built around the base of the tower. In this view, the stairway to the tower can be seen on the right, with the dashed lines above the garage marking the location of the tower uprights: 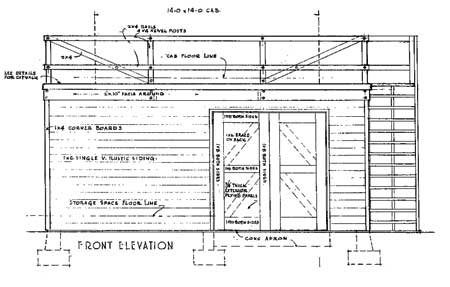 As this design detail from the 1944 plans suggests, there were a number of concrete footings used in the construction of the Bald Mountain lookout tower. Today, these seem to be the only remaining traces of the structure. Three footings are loose, and have been moved around and used by campers over the years. Other footings remain in the ground, mostly reclaimed by the undergrowth. This footing is located along the spur trail leading to the east viewpoint from the lookout site: 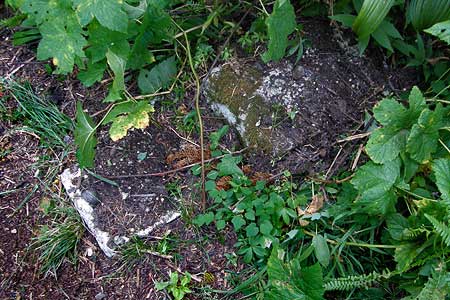 There is some irony in the historic Bald Mountain trail being “lost”, as the mountain is now almost completely circled by the Timberline Trail, and thousands of hikers make their way along this route every year. Almost all of these visitors walk right past the unmarked summit path leading to Bald Mountain.

But for those seeking the route less traveled, the hike to the summit is easy, provided you successfully navigate the maze of popular trails in the area. The key is knowing how to spot the unmarked junction with the Timberline Trail. Take a close look at this photo to help you recognize the spot if you choose to visit the old trail — this view is how the trail appears from either of the approaches described below: 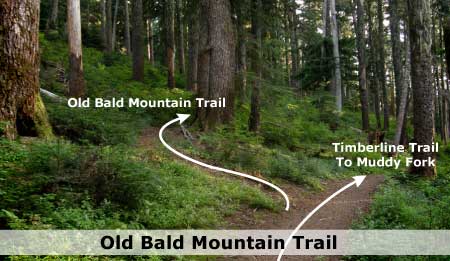 From Lolo Pass: The Classic Approach

The classic hike begins at Lolo Pass, and follows the Pacific Crest Trail through handsome forests for three miles to the base of the Bald Mountain summit path. The total mileage on this option is 6.6 miles round trip, with an elevation gain of 1,400 feet. The following is a map of the Lolo Pass approach that accompanies the hike description I wrote for the Portland Hikers Field Guide: 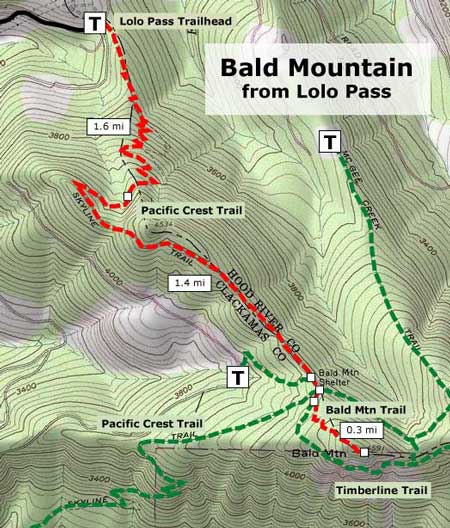 For a detailed description of the Lolo Pass approach, visit the Portland Hikers Field Guide page:

The Field Guide description also includes driving instructions to the trailhead. This is a dry hike, so carry water — and in early summer, plan on the usual bugs that plaque hikers just after snow melt. My favorite time to hike this trail is on a clear day after the first autumn snow dusts the mountain in late September or October. This is when the area is free of bugs AND crowds.

From Top Spur: The Family Route

For a shorter hike that works well for families with kids (or for adults looking for a short afternoon or evening activity) you can also approach Bald Mountain from the Top Spur trailhead. Be forewarned that this is one of the most popular trailheads in the Mount Hood region, and mobbed on summer weekends.

But even on busy weekends, you can smile to yourself as you leave the crowds behind, and head up the quiet, old lookout path for some solitude — hidden in plain sight! From the summit viewpoint, you can literally look down on hikers passing hundreds of feet below on the Timberline Trail, oblivious to your presence. 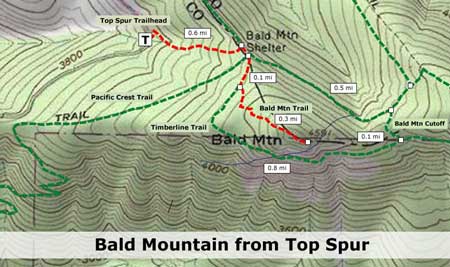 The Top Spur option is just two miles long, round-trip, with an elevation gain of 550 feet. Though short, portions of both the Top Spur and Bald Mountain trails are steep, so you will notice the elevation gain! The tradeoff for kids is the feeling of climbing a real mountain. Bring a pair of binoculars for kids to explore the details of Mount Hood or watch hawks float across the Muddy Fork Valley, below.

For a detailed description of the Top Spur approach, including travel instructions, visit the Portland Hikers Field Guide page:

One of the most magical times to visit Bald Mountain is evening, when you can watch the awesome west face of Mount Hood light up at sunset, but still have enough light to hike back to the Top Spur trailhead.

Both hikes are usually open from mid-June through mid-November, and both require a Northwest Forest Pass to park. Both trailheads usually have portable toilets, but no water — be sure to carry your own.