During the peak of summer in the high country around Mount Hood, hikers flock to the lush mountain meadows in places like Paradise Park, Cairn Basin, Elk Cove and Elk Meadows to take in the huge drifts of waist-deep wildflowers. Along the way, they usually pass through the cinder slopes and glacial moraines that seem barren in comparison, but in fact are home to some of the toughest survivors of the wildflower community.

These diminutive flowers are incredibly rugged, resilient plants that somehow manage to persist in the harshest of alpine environments, cheerfully blooming each August during a snow-free growing season that spans only three or four months. Most are perennials, persisting from summer to summer, despite a thick snow pack for much of the year.

Their tiny size is but one of their adaptations to the extreme conditions that exist above the tree line. Most also feature long taproots that anchor them deep in the loose mountain soil, and thick, leathery leaves that help conserve water while maximizing photosynthesis during the very short growing season.

There are a number of tough species in this community of survivors, but the following are seven that are among the most common and interesting, and worth getting to know. These plants were all photographed on the same August evening, high on the south slopes of Mount Hood.

Creeping Penstemon
This tiny flower grows just six inches tall, though its woody stems are almost shrub-like, and allow the plants to form carpets several feet across, usually on the protected side of a boulder. The oval, evergreen leaves are small and leathery, and also seem almost shrub-like, resembling tiny rhododendron leaves. The flowers can range in hue from lavender to nearly pink, and bloom in short spikes in early and mid-summer.

Desert Parsley
This little plant (also called Few-Fruited Desert Parsley) also grows in loose sand or pumice at the tree line, and is anchored by a large taproot that can up to a foot long. The thick roots of wild parsleys were collected by Native Americans as a food. Desert Parsley is most notable for its graceful, fernlike leaves, but also sports bright yellow blossoms in mid-summer. The plant is rarely more than four or five inches high.

Low Mountain Lupine
This wonderfully tiny lupine is an obvious cousin to its many tall relatives, except that it grows no more than three or four inches tall. The tiny leaflets resemble the large, palmate leaves of larger lupines, except that they are the size of a button. The leaves are also covered in soft, silvery velvet that further helps the plants conserve water. The plants are anchored by a long taproot, like most alpine dwarfs. Their blossoms are globe-shaped, like a clover, though clearly related to the tall flower spikes of their larger cousins. Low Mountain Lupine blooms from early August through early September.

Partridge Foot
This delicate plant can form an extensive groundcover below timberline, but also blankets moist spots in the harsh country above the tree line, especially where melting snow trickles in small streams across rocky slopes. Partridge Foot is only a few inches tall, with creamy white flower spikes reaching 3-4 inches in mid-summer. The common name comes from the shape if its leaves, which apparently resemble a bird’s foot. 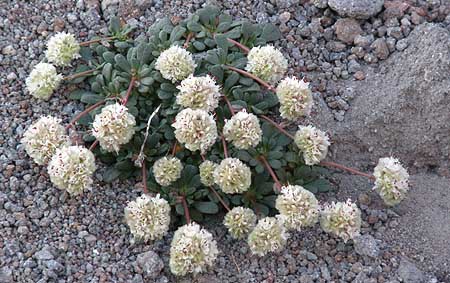 Pussypaws
This tiny wildflower also has a self-evident common name, owing to the soft, fleshy, paw-shaped leaves that help the plant store moisture in its harsh habitat. In mid-summer, Pussypaws are covered with tufts of pom-pom flowers that open white, then fade to rose-pink. These little plants are no more than two inches high, with flower stems reaching three or four inches. It thrives in nearly soil-less pumice, and has an amazing taproot that can be as long as ten feet!

Spreading Phlox
Easily the lowest alpine flower, Spreading Phlox grow in a mat just 1-3 inches high, with their stunny explosion of cheery blossoms literally covering the plants in early August. The button-like flowers range from white to blue, with all shades of pink and violet between. Like its alpine neighbors, Spreading Phlox is deeply rooted, and thus well adapted to the dry, loose pumice and sandy slopes that it thrives in.

Sulphur Flower
Also known as Sulphur Buckwheat, this is a tough survivor that lives in the least hospitable reaches of the alpine environment. This plant has silvery leaves covered with tiny hairs that help conserve moisture, allowing the plants to grow in what seem to be impossible habitats — from cracks between rocks and in loose scrabble on moraines. The flowers can range from cream to yellow, and light up slopes in early summer, before fading to a rosy hue. The top photo in this post shows a colony of Sulpher Flower on Mount Hood’s dry south slopes.

How to See Them
These timberline survivors can be seen all around Mount Hood, and on some of the higher surrounding peaks, too, such as Lookout Mountain and the high spots in the Columbia Gorge that reach above the tree line.

An easy way to see these plants up close is to explore the trails around Timberline Lodge. Several paved footpaths circle the lodge, and head up the mountain from the back of the lodge. You can follow one all the way to Silcox Hut, which is located far above the tree line, but still features many of these tiny flowers along the way.

Another option from Timberline is to follow the Pacific Crest Trail (PCT) south from the lodge, crossing the glacial headwaters of the Salmon River then to an impressive overlook of the White River canyon. This section of the PCT is lined with these tiny alpine survivors. Visit these trails in early August, and you’re guaranteed to see them in bloom.