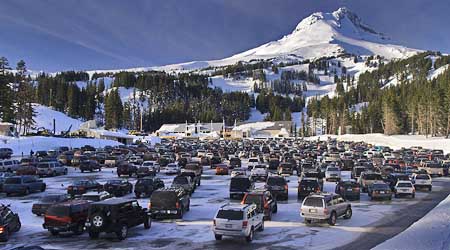 First-timers arriving at the Mount Hood Meadows resort in winter are greeted with a handsome view of the broad southeast face of the mountain — framed by a giant, mall-sized parking lot. Since the resort first opened in 1967, the parking lot has been a continued bone of contention for mountain defenders.

The original 6-acre lot covers what were once mountain meadows and groves of ancient subalpine fir and mountain hemlock. Growth rings in trees cut on nearby ski slopes show the cleared forest to have been upwards of 200 years old, and among the oldest alpine trees on the mountain. The lot has since been augmented by a 3-acre overflow lot in the forests below, and the 5-acre Hood River Meadows satellite lot built in the late 1970s. The resort master plan calls for another 8 acres of parking, which would bring the total for Meadows to an equivalent of 22 city blocks of high-elevation pavement.

A visual comparison of the main Meadows lot (center) to Elk Cove, on Mount Hood's north side and a similar footprint in downtown Portland.

But the deed is done, and Meadows has begun to respond to pressure to minimize expansion of the lot to the extent that buses are now used to transport a few skiers. But the long-term solutions must include variable fees on parking and lift tickets that help even out the demand to park at the resort, and prevent the huge weekend crowds that drive parking pressures (as well as highway congestion).

This will surely be fought by the resort operators, but they’re running their business on leased, public land. You and I own the parking lot, and the land under the lodge and every lift tower the resort operators have constructed. So it’s fair to say “enough is enough” as the land owners. And enough IS enough for the Meadows resort. From this point forward, the operation should focus on reducing parking, not expanding it.

What would pricing do to help manage parking? Done correctly, and in tandem with lift ticket prices, variable pricing would distribute traffic on Highways 26 and 35 in a way that prevents traffic jams on weekends, and pressure to expand these routes for a few skiers. It would also reduce lift lines, and pressure on lodge facilities. But most of all, it would allow the parking lot at Meadows to stop growing — an eventually, be reduced in size. 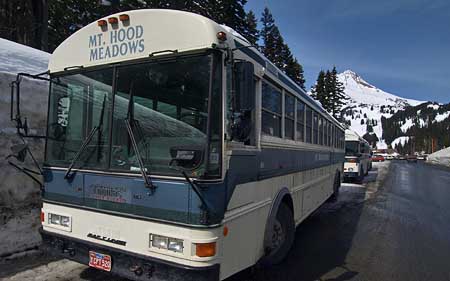 Ski buses at Meadows are lost in the sea of automobiles - a fact that must change in order to reclaim some of the paved areas, and restore sustainability to the resort.

Why should the current lot be reduced in size? Because the design of the main lot has a substantial impact on the headwaters of the East Fork Hood River, which flows around the east perimeter of the parking area, then plunges over lovely Umbrella Falls — just 300 feet from the south edge of the lot.

As might be expected, the splash pool of the falls is littered with debris tossed out by skiers, then blown into the stream by snowplows. Worse, sand and gravel blown from the roads is rapidly silting the stream, filling once-deep alpine pools with sediments that the natural stream flow cannot hope to keep pace with.

New innovations in urban parking lot management provide good examples for the Meadows resort to follow, including bioswales and pervious paving designed to contain and treat runoff. These concepts could be applied immediately, and with proven results. Across the country, storm water mitigation is being designed into new parking lots, and retrofitted into existing lots to protect water supplies.

A more permanent solution would be an undergound, structured lot that wouldn’t require plowing, and wouldn’t add any surface runoff to the stream system. A working example is the lot under Capitol Mall, in Salem — few visitors realize that the lush gardens and fountains framing Oregon’s Capitol dome are actually the roof of a parking structure. In the long term, this could provide the best solution for Meadows, and would be welcomed by skiers who now tromp through grimy parking lot slush and rows of muddy cars to reach the lodge. 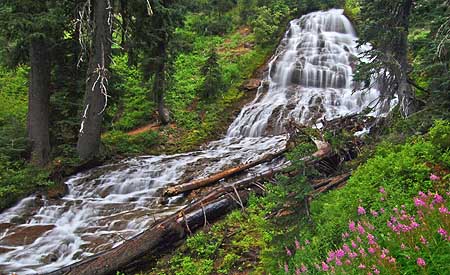 The Meadows resort operates under a permit from the U.S. Forest Service, and can be clearly be regulated into these changes, based simply on environmental considerations. But the political reality is that the resort would likely need an economic incentive to rehabilitate the lot.

One option is to simply subsidize the development of structured parking, in tandem with an a pricing program and meaningful transit to the resort. This has been done at some of Portland’s suburban light rail stations, for example, with marked success. Another option would be to allow Meadows its long sought after overnight lodging in exchange for a major upgrade to its parking lots and transportation program, and a parking lot lid would be an excellent spot for new lodging.

In the end, undoing the parking lot damage is part of adopting a new ethic for the Meadows resort that goes beyond what is now largely a token marketing facade of “sustainability.” It’s time to expect more from the corporate tenants of our public lands.