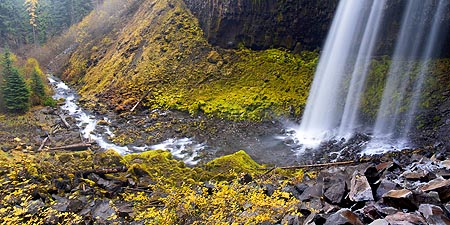 Autumn in the huge amphitheater that holds Tamanawas Falls

For many years, the rustic path along Cold Spring Creek to Tamanawas Falls was a well-kept secret, but today the short trail to this 150-foot falls has become a popular hiking destination. Floods and a massive rock slide rearranged the trail at times in recent years, but the route has since been repaired, and is no less scenic for ravages of Mother Nature. The easy hike to the falls is described in the Portland Hikers Field Guide.

Cold Spring Creek is unique in that it drains a rather large portion of Mount Hood’s eastern slope, yet runs clear year-round because it carries no glacial outflow. The headwaters are formed by the sprawling Elk Meadows and the high, tundra-like slopes of Cooper Spur. A classic overnight backpacking trip (or long day hike) is the 15-mile loop along the Cold Spring Creek trail to Elk Meadows and return via Bluegrass Ridge.

One of the subtle attractions of the trail is the mix of eastside and westside flora — you’ll find eastside species like Western larch, Ponderosa pine, Douglas maple and quaking aspen flanked by more western species like Western redcedar, white pine and Douglas fir. There are also a surprising number of wildflowers in display in early summer, and in autumn the trail is lined with brilliant cottonwoods and vine maple. 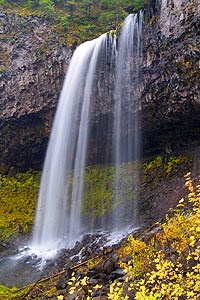 A close-up view reveals the huge cavern behind Tamanawas Falls

But the main attraction on this hike is Tamanawas Falls, a thundering spectacle during early summer snow melt, and more graceful curtain later in the season. “Tamanawas” is the Chinook jargon word for “friendly or guardian spirit”, and the current spelling was corrected by the Oregon Board of Geographic Names in 1971. With its broad, symmetrical shape, the falls is more in the form of a Gorge waterfall, since it flows in a perfect curtain over what appears to a layer of basalt. But the rock here is andesite, a more recent material that has erupted from the vents that formed Mount Hood and many of the smaller peaks in the area.

Adventurous hikers will not want to stop where the spur trail to the falls abruptly ends at a viewpoint. With a bit of careful scrambling, even better views of the falls can be had from the stream, just beyond the trail, and with a bit more scrambling, hikers can even make their way into the huge cavern behind the falls. The view from behind the water is especially awesome, though too rough to reach for younger children and less experienced hikers.