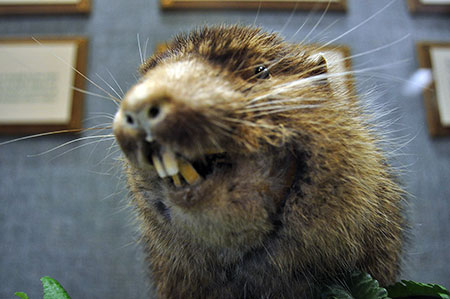 Mountain Beaver happy to be stuffed (?) in the Longmire Museum (Wikimedia)

While you may be a regular visitor to our forests, you might not know what a Mountain Beaver is, or that they exist in abundance on the west side of the Cascades. Most people don’t, as these are shy and seldom seen creatures. But if you are a hiker, you’ve almost certainly cursed their treacherous dens that show up along trails that pass through their mountain habitat.

This article is a brief introduction to this humble species. And while Mountain Beaver may not be the flashiest creature in our forests, they make up for it in uniqueness. Here are 13 surprising things to know about this unusual animal:

1. They’re not really beavers..? Not even close, though they do belong to the enormous Rodentia order that includes porcupine, beaver, squirrels, chipmunks and dozens of mice species. Mountain Beaver belong to the Aplodontiidae family and are its sole species in North America, Aplodontia rufa, meaning red-haired or tawny. Like true beavers, (and all rodents), Mountain Beaver are defined by their large incisors, which they also use to chew through limbs and small trees. Unlike beavers, they have short, furry tails and are much smaller, weighing around three pounds, where North American Beaver can weigh anywhere from 35 to 65 pounds. 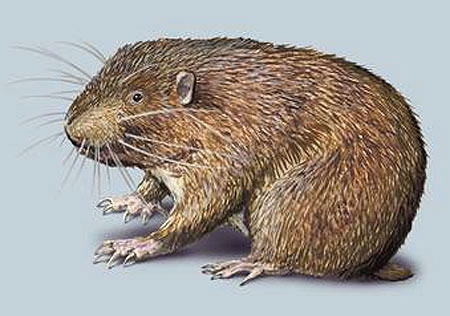 2. They are ancient! The species, that is. While a typical Mountain Beaver lives just 6-10 years, the species dates back in its current form to the Miocene, a geologic era that stretches from about 5 million years ago to 25 million years ago. Thus, they are considered a living fossil, with bone structures that predate that found in all other North American rodents.

This means Mountain Beaver existed pretty much as we find them today at a time when sabre-tooth cats, three-toed horses and oreodonts were roaming Oregon, and early humans were just about to split off from the Chimpanzee family tree in eastern Africa. The Cascade Mountains that now define their range had yet to form. They are survivors!

3. They only live here..? Mountain Beaver are found only in a narrow band between the west slopes of the Cascades and the Pacific coast, stretching from northern California through coastal British Columbia. But while their range is small, they are abundant here, and not considered to be a species at risk. There are seven recognized subspecies of Mountain Beaver, and one subspecies called the Point Arena Mountain Beaver is listed as an endangered species. These rare, endangered relatives live in a small area on the Mendocino Coast in California, south of the main Mountain Beaver range. There were only about 200 to 500 members of this subspecies estimated to be surviving when they were listed in 1998.

Within their range, Mountain Beaver thrive in moist deciduous mountain forests and wooded foothills. They prefer deciduous forests, so at higher elevations, this often means in steep avalanche chutes lined with Red alder and lush understory where conifers dominate most of the forest. This is also where hikers are most likely to encounter their dens – watch your step when you cross through Red alder stands in the mountains!

4. They live alone. Like many in the large Rodentia order, Mountain Beaver live alone. This is most surprising when you encounter their extensive burrow systems, which can occupy a quarter acre and suggest the work of a colony (like prairie dogs). Though their burrows often interconnect, they defend their burrows against their neighbors. Vacant burrows are quickly occupied by other Mountain Beaver and reused. 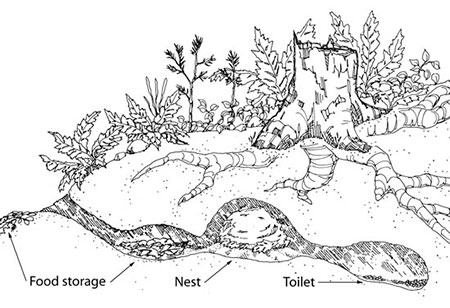 5. They’re mostly underground… nowadays. Mountain Beaver venture out to gather food, but don’t travel far far, and otherwise live much of their life in the expansive tunnels they dig. Their tunnels are highly organized, with multiple entrances and dedicated rooms for nesting, storing food, toilet and “earth balls” — round rocks or hard clay that are believed to serve as plugs within their tunnel systems and upon which Mountain Beaver sharpen their incisors.

However, they can also climb trees and swim short distances, a vestige from when scientists think their Miocene ancestors were tree dwellers.

6. They work the night shift. Mountain Beaver rarely emerge from their dens during the day, preferring to gather food at night when the outside world is as dark as their burrows, and predators are less likely to spot them. While they have poor hearing and eyesight, their sense of smell and touch is excellent, making them well suited for the night shift. It’s unknown whether they are able to wear uniforms, perform security detail or eat stale donuts, however…

7. They can whistle! While they are mostly quiet animals, Mountain Beavers can issue a sharp whistle or squeal to defend their burrows. They can also be heard grinding or clicking their teeth while in their burrows or foraging for food or as a defense. But while they can whistle, they apparently cannot carry a tune… at least according to scientists.

8. They have secret love lives..? Little is known about their love lives, except that they seem to reproduce at two years of age. Mountain Beaver mating has never been observed, perhaps because it occurs during the winter months when they are underground. They produce litters of 2-3 young in early spring, and these young soon venture out to find their own solitary plots to make their homes. Unlike humans, grown Mountain Beaver offspring do not return to their parent’s home after college to live in the extra burrow, rent-free, however.

9. They eat their food twice! It’s gross to us, but true: they eat their poop pellets after the first time thru to further digest any remaining nutrients (hey, so do rabbits, so not so weird!). But they keep their dens tidy and store the twice-digested poops in dedicated toilet chambers in their dens. And really, is a Mountain Beaver poop pellet that much more disgusting than a mystery McNugget stamped out at a chicken rendering plant..? “Food” for thought…

10. They have cast-iron stomachs! Their diet consists largely of Sword fern and Bracken fern leaves, which makes Mountain Beaver unique, as Bracken fern is poisonous to most herbivores. They also consume Red alder leaves, another common species in the open, deciduous forests they prefer. Their short tails and slightly opposable thumbs allow them sit up while eating, holding food between their front feet. Their agile thumbs also reportedly come in handy for operating a TV remote or texting other Mountain Beaver. 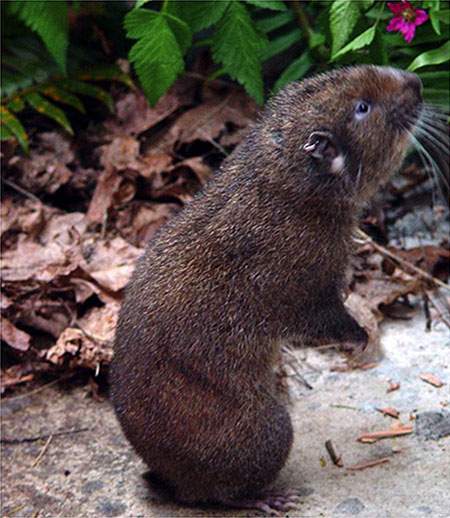 11. They don’t hibernate. Mountain Beaver don’t hibernate, though they are rarely seen in winter, when their burrows are often under a blanket of snow at higher elevations in their habitat. Instead, they spend the winter underground, living on stored food they have gathered and catching up on social media.

12. They’re a favorite entree! Not surprisingly, Mountain Beaver are a favorite and filling snack for our larger carnivores, including bobcat, cougar, coyotes and even large raptors, including hawks, eagles and owls. Increasingly, humans are becoming a predator of Mountain Beaver, not for food, but because they have begun to colonize areas where their digging and habit of topping young saplings marks them as a pest.

Sadly, they are still kill-trapped and poisoned for this reason on corporate timberlands. Fortunately, pubic awareness of the value of these animals is gradually increasing, especially in the Puget Sound region, where land owners are encouraged to relocate animals or simply learn to live with them (after all, they were clearly here first!).

13. Clark the Mountain Beaver has a book out..! Oh, you didn’t know there was a celebrity Mountain Beaver? Well, it turns out that Washington author Karen B. Shea has written a wonderful children’s book about a resident Mountain Beaver in her yard who goes by the name of Clark. If you have little hikers in your family, this would be a nice way to introduce them to an animal they might otherwise never learn to appreciate.

Mountain Beaver happy to be stuffed (?) in the Longmire Museum (Wikimedia)

You can support this local author and pick up a copy of Karen’s book (beautifully illustrated by Kelly Halpin) at Clark the Mountain Beaver’s website. Here, you’ll also find an accompanying coloring book and links to Clark’s YouTube channel (yes, you read that right):

So, next time you stumble across one of their cavernous dens, you can smile knowing it was dug by a prehistoric survivor that hasn’t changed all that much in 50 million years. Clearly, the Mountain Beaver lives by the credo “If it ain’t broke, don’t fix it!”

And as always, we can learn something from even the humblest of species. Just watch your step in the process…