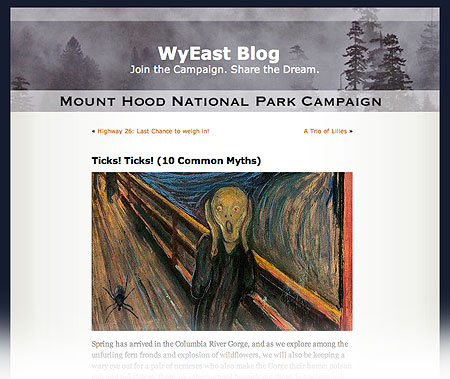 This week marks the five-year anniversary of my first post on the WyEast Blog, so I thought I’d share a few factoids and highlights from the past five years to mark the occasion. I started the blog as a way to provide more timely content than is possible on the Mount Hood National Park Campaign website and as a way to more actively champion the idea to anyone willing to read the articles!

It has been to my great surprise that so much traffic has come to the blog over the past five years. My articles are in long-prose format, eclectic and hyper-detailed in nature and only posted every couple weeks, so the WyEast Blog is way out of the mainstream of the post-constantly-or-die culture of the blogosphere. Yet, visits to the blog continue to grow: the following chart shows the monthly growth in traffic over just the past two years:

Dark blue shows actual visitors to the site (data that only became available in 2012) and light blue shows page views. On average, most viewers read about 1.5 pages, or from my perspective as the author, roughly ever other visitor takes a look at a second page during a visit. The chart also shows seasonal spikes of summer traffic — not something I would have expected, but more on that in a moment.

A typical day brings between 100 and 150 visitors during the off-season, and total visits are rapidly approaching 100,000 – another milestone for an oddball blog! Most of that traffic has been in the past two years.

The following chart shows monthly visitors for the full five years — with an audacious FOUR in that first month in 2008 (thanks, mom!) and about 2,500 so far this month (the green box marks the month with the most traffic in the history of the blog, with 5,651 visits in August of this year):

Equally surprising (to me) is the diversity of visitors coming to the blog. A majority is directed from search engines, but they come from all over the world. This map shows their origins for just the past week:

This map shows their origins over the life of the blog, with a surprising number of visitors from well outside the English-speaking world:

Some of that far-flung traffic is nuisance (spammers), but I suspect most of the exotic locales are explained by the most popular topics and search terms. For example, the following chart shows the most-read of the 120 articles that I’ve published over the life of the blog — and not surprisingly, the companion posts on coping with ticks and poison oak continue to be visited regularly from points far and wide:

But close behind the creepy-crawly articles are posts on the history of the Timberline Trail, one of my “proposal” articles addressing some of the problems facing Oneonta Gorge and — perhaps most surprisingly — an article on the Clackamas River Trail!

The following chart highlights the most popular search terms that have brought readers to the blog, with “Oneonta Gorge” standing head and shoulders above any other common terms that brought visitors to the site:

I deviated from the top five them for the above chart in order to include the seventh most popular search term — the WyEast Blog, itself! Of course, that could just be one person who keeps typing the same search term in, for lack of a bookmark… (mom… dad?)

The search terms that bring readers to the site make for a VERY long, and often bizarre list, with most being used just a few times, or often just once (“lost boots Paradise Park”). The weekly view (below) of search terms shows this nicely, with the expected “ticks” followed by some interesting, very specific queries: 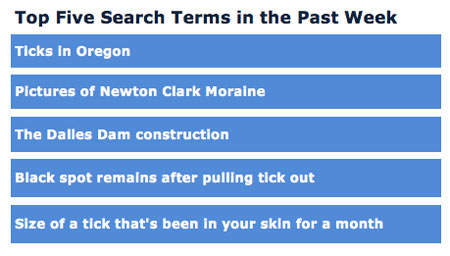 I’m guessing the last two are from the same person — and hopefully, the tick article helped persuade that visitor to get some medical attention… yikes!

That’s probably more than enough retrospective, so if you’ve endured the charts and graphs thus far, thanks for your interest in the blog — and especially the thoughtful comments and encouraging e-mails I’ve received along the way!