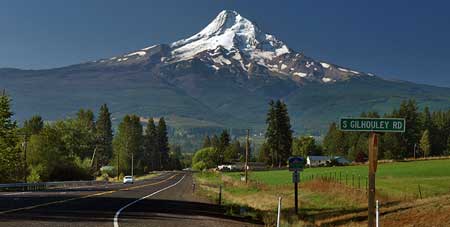 Few in the Hood River Valley would ever recognize the name “Gilhouley Road”, much less anyone from beyond the area. And yet, at the intersection of this obscure dirt road and the Mount Hood Loop Highway lies an imposing scene that is treasured by locals and tourists, alike: the first big look at Mount Hood as you descend into the Upper Hood River Valley.

On a clear day, you’re guaranteed to see tourists pulled to the highway shoulder, snapping pictures of the mountain rising above bucolic pastures, even as semi-trucks roar past on the downgrade. The scene is irresistible. 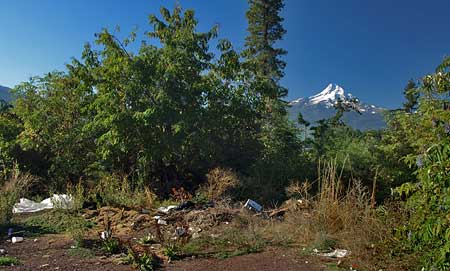 Earlier this year, a friend and national parks advocate from New England was visiting, and took the opportunity to drive the Mount Hood loop, and see “Oregon’s next national park”. Despite all of the mistreatment Mount Hood has seen, his sharpest critique was the shabby way in which we treat our visitors. He was amazed at the utter lack of traveler information — and confusing information, when it was provided. So, this article is inspired by his comments.

In the early days of auto touring, the Columbia River Gorge had the “King of Roads”, and among the great features of Samuel Lancaster’s magnificent scenic highway were the waysides and viewpoints that dotted the route. A family could load into their 1917 Packard Twin Six, and make a day of it, pulling off at each viewpoint, snapping photos with the family Brownie camera, and often following the short trails that led to still more views, or perhaps a waterfall.

Times haven’t changed all that much, since, but the way we design our roads has. Tourists are now discouraged from stopping in many spots, and often take their life in their hands, if they do. Today’s highway engineers are much more concerned about keeping cars moving, at all costs.

The Hood River valley has just one “official” roadside viewpoint, located on county-owned land at Panorama Point in the lower valley. The scene is well-known, but also well removed from the Mount Hood loop highway by a couple miles. This proposal is for a companion overlook to Panorama Point, located in the upper valley, where the mountain first comes into full view for highway travelers, at the obscure junction with Gilhouley Road. 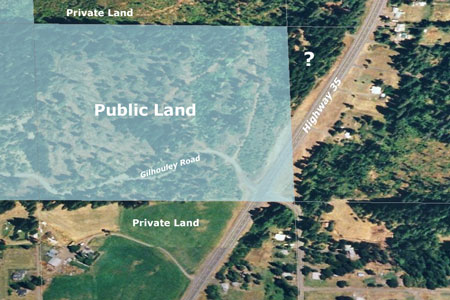 In researching the possibilities for a new wayside at this spot, I first did a site inspection of the hillside above the highway: the area is recently logged, but with a fair number of mature trees left standing. The inevitable illegal dumping is present, of course — the scourge of public lands in highway corridors. But the view is breathtaking, with Mount Hood even more dramatically framed by hills, forests and fields than from the highway grade.

According to public lands data, the land is mostly public, and owned by Hood River County. The map (above) shows a perfect rectangle of public property that extents east along Gilhouley Road from nearby Middle Mountain, largely encompassing the wayside site. One triangle of land (indicated with a question mark) may be a private parcel, but isn’t essential to the wayside concept.

The approach to the site from Highway 35 is ideal: the intersection is located on a long, straight segment of road that would make for safe exit and entry from either direction. The presence of Gilhouley Road means that access is legally assured, with little possibility of an extended battle with ODOT for the right to build a wayside.

Looking south at the wayside site from Highway 35

The larger question is whether ODOT and Oregon State Parks would step up to make this a joint venture with local governments. It seems plausible, at least, given the lack of waysides along this portion of the loop highway, and the obviously heavy tourist traffic.

The site inspection revealed a surprising expanse of public land available at this site, so I’ve sketched a full-blown day use park as the proposed “Baldwin Memorial Wayside”.

As the schematic (below) shows, there could be a viewing structure, picnic areas, a nature trail and restrooms. This degree of development puts the concept into the major investment category, but certainly not beyond reach, especially since there are no other state parks or waysides in the Hood River Valley. 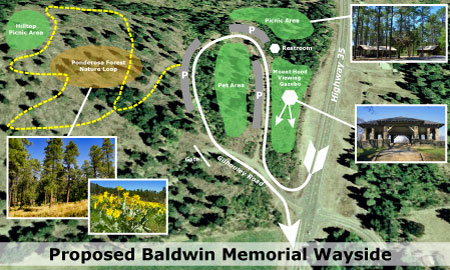 Because the site has recently been logged, the wayside proposal could be equal parts park development and habitat restoration. While the main feature would be a developed overlook for highway travelers, this proposal also takes advantage of the open hillside rising above the highway. A scattering of ponderosa pine spared from logging provides an excellent opportunity for an interpretive trail built around habitat restoration.

One interesting possibility could be a restored balsamroot and lupine meadow beneath the pines. These spectacular blooming species are native to the area, are already present on the site and could become a popular draw for spring visitors to the area, just as similar wildflower spots in the Gorge are now.

What would it take?

Could a project like this really happen? Some stars are already aligned: Hood River County already owns the land and access rights to the highway at Gilhouley Road. Together, these are an invaluable step forward, since the road guarantees highway access and the land can be used as a grant match for state and federal funds. The site also benefits from access to utilities and proximity to existing emergency services. These are all core considerations when creating a new public park.

Most of all, it would take local leadership in the Hood River Valley area to secure state or federal funding through grants or other sources. Even in times of tight public budgets, this sort of project is achievable, especially if it helps reinforce the local economy and has an ecological purpose.

Lastly, what would this new wayside be called? Well, “Baldwin Memorial Wayside” is simply borrowed from nearby Baldwin Creek, which in turn, memorializes Stephen M. Baldwin, who settled a claim along the stream in 1878. This would have made Baldwin one of the earliest settlers in the area. 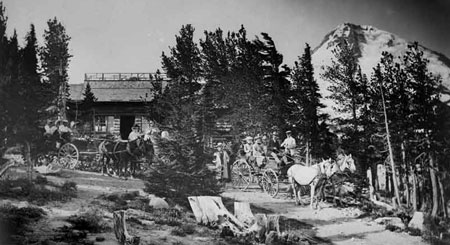 But this is where the connection to the Mount Hood view comes in: Stephen Baldwin’s son Mason “Mace” Baldwin became a well-known figure in Hood River County history in the early 1900s. Most notably, he was one of the founders of the legendary Crag Rats mountain rescue group in 1926, formed after the dramatic rescue he led that summer of an 11-year-old boy lost on Mount Hood.

Mace Baldwin not only gave the Crag Rats their name, he was also elected to be the group’s first “Big Squeak” (president), and went on to take part in many mountain rescues over the years. The Crag Rats were the first mountain rescue organization to be formed in the American West. In 1954, the Crag Rats adopted the venerable Cloud Cap Inn, on the north shoulder of the mountain, and have since been the careful stewards under special arrangement with the Forest Service.

The Crag Rats continue to be active today, and given the connection of this site to one of their founders, perhaps the “Baldwin Memorial Wayside” could include a tribute to these mountain heroes? It would certainly be a fitting memorial, and a fine way for visitors to enjoy the mountain view and learn a bit more about it’s rich human history.