Second only to our towering Pacific rhododendron (Rhododendron macrophylum) in pure spectacle, the striking white trumpets of the Mount Hood lily are unforgettable. These handsome lilies often grow to more than six feet in height with as many as 20 flowers, each up to 8 inches in length. Never heard of the Mount Hood lily? That’s probably because you know this as the Washington lily (Lilium washingtonianum Kellogg), though it is also widely known as the Cascade lily and Mount Hood lily. A slightly variant race of the species in Northern California is commonly called the Shasta lily.

But the rather generic name of “Washington lily” is made more confusing by the simple fact that this beautiful plant doesn’t even grow in the state of Washington. Its northern extent is the area around Mount Hood, and its range extends down the Cascades and into the California Sierras. But thankfully, it turns out that the lily wasn’t named for the State of Washington, at all. Instead, the naming pre-dates Washington statehood.

In fact, botanist Albert Kellogg named this regal flower for Martha Washington, wife of our first president, when he first described the species in 1859. The spectacular, aromatic plants were soon collected for gardens and picked by forest visitors, locally decimating the population by the 1950s. Today, they have made a comeback, and are relatively common across their range, especially around Mount Hood. 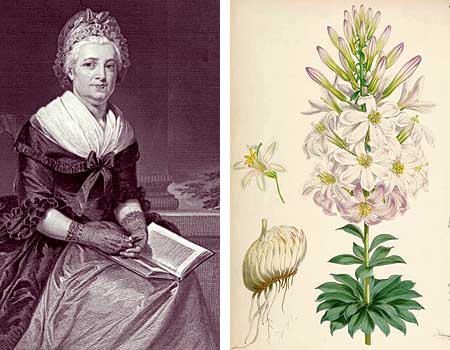 Like most lilies, the Mount Hood Lily is a perennial that grows from a bulb, and thus the ease in collecting the species for commercial use. Native Americans also collected the bulbs as a food source. The plant grows in open woodlands and forest openings, often in surprisingly dry conditions.

In addition to multiplying their bulbs over time, the plants produce up to 200 seeds in the capsules that follow each flower. While digging the bulbs is strongly discouraged, collecting the seeds to grow in home gardens is a responsible, sustainable means of propagating the plants. Collected seeds of the native species, as well as many hybrids, are also available from specialized retailers.

So, in the spirit of provincialism, I propose that we rename this plant, simply because of the confusion over the name — after all, Kellogg named the plant in the year in which Oregon became a state, so he was likely unaware that another state in the Northwest would be named for George Washington.

There’s also the fact our first First Lady already has the aristocratic series of Martha Washington Geraniums (Pelargonium domesticum) named in her honor, and thus adding the Mount Hood lily is a mere asterisk in comparative prominence. Besides, Martha Washington has already had three postage stamps, two early dollar bills, several U.S. Mint commemorative coins and the only U.S. naval ship — the U.S.S. Lady Washington — to be named for a first lady.

As a modest and proper woman in the tradition of her time, surely she would cringe at this embarrassment of honors? And as the chief overseer of the Mount Vernon plantation and a gardener herself, surely Martha Washington would be the first to agree that the Mount Hood lily is a far superior name, both in descriptiveness and clarity?

This leads us to another simple compromise: when she tended to troops at General Washington’s side in the desperate struggle at Valley Forge, Martha Washington became known as Lady Washington, and a true heroine in her time. So, perhaps the Lady Washington lily would be a proper solution to our naming dilemma?