Interior Secretary Ken Salazar set the Pacific Northwest forest recovery effort back on track in July when he reversed the Bureau of Land Management’s (BLM) Western Oregon Plan Revisions (the WOPR, a brilliantly unintentional blunder as acronyms go, as it became known as “The Whopper”). This represented a major step back from scientifically corrupt policies intended to enrich timber corporations at great cost to our public lands.

In this recent opinion piece in The Oregonian, Dominick DellaSala and Randi Spivak respond to Salazar’s move, and provide an excellent framework for how we should move forward to restore our public forests. Their prescription: emphasize needed thinning of the sickly, biologically sterile tree plantations left from the logging heyday of past decades, and embrace the value that our restored forests will have in the global effort to reduce carbon emissions.

The eastside forests spreading out below Lookout Mountain look healthy enough from a distance, but in reality are in dire need of a bold new restoration strategy.

As described in their article, the Siuslaw National Forest has already begun to embrace this new approach, and other public forest managers are beginning to take notice. But a truly comprehensive restoration effort must be more aggressive, and should also focus on stabilizing the forest-based communities that were left to die when the big timber operations pulled out in the 1980s and 90s

Traditional thinning offers a couple of opportunities for local communities: the timber operations involve most of the same logging skills that were once the mainstay of rural Oregon. In addition, the harvested wood from thinning offers not only traditional saw logs for small mills, but also a new economic niche in the smaller woody debris that was once discarded or burned on site in the forests. New uses for small woody debris include engineered wood products and even energy production as biomass. 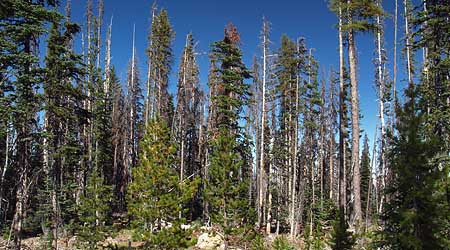 One practical challenge in reaching this new approach will be the scaled-back network of logging roads, since the over-built system constructed in the second half of the 1900s is rapidly crumbling and infeasible to maintain for the long term. One strategy is to tie road decommissioning to forest thinning and restoration efforts, pulling out obsolete roads after forests have been largely restored. Another could be aerial operations, perhaps even balloon logging. Still another could be roadless logging with light equipment or even horses — a practice well established on small, private woodlots in Oregon.

The key to finding this new balance in sustainable forest restoration a role of direct stewardship among the forest communities — to view them as the keepers of the forest, as opposed to the “forest dependent” mindset of the industrial logging era. This means establishing an ongoing relationship between community-based forest management organizations and the federal agencies that govern most of our public forest land. These new organizations could follow the lead of watershed councils and farm bureaus, using formal governance coupled with direct management responsibilities as forest recovery agents.

A bright spot in the restoration of the eastside forests near lookout mountain, this thinned plantation is beginning to resemble a natural forest, with multi-aged stands and a recovering understory.

How would the economics of community-based stewardship work? In a commodity-based model of selling products recovered from thinning, the objective is straightforward — but unlikely to be profitable as a private enterprise.

Instead, the public will likely need to provide some level of subsidy for the restoration work involved, with commodity proceeds offsetting public costs. The advantage of a public subsidy is that it provides an ongoing public interest in the health and viability of the forest communities, themselves, and could help avoid the volatility that private timber harvesting brought to these communities in their first century.

A few stands of late succession ponderosa and Western larch forest still exist on the slopes of Lookout Mountain, providing a glimpse of what a restoration policy must aim for.

But the more interesting idea is to create a long-term financial model for stewardship communities based on carbon sequestration as part of global efforts to reduce carbon emissions. Carbon credits would be sold as offsets to carbon polluters, and providing a permanent incentive to bring the northwest forests back to health.

The credits could be managed as a community trust, or managed through a public-private corporation. Under this paradigm, there would be little incentive to harvest large trees, since they would exist primarily as carbon storage units under the new carbon-based economic framework.

Of course, we also know that big trees and mature forests also provide a much wider array of ecological and social benefits, but these costs have never factored in to the short-term price for raw logs in the old timber harvesting paradigm. As DellaSala and Spivak point out in their article, the Pacific Northwest is uniquely capable of storing carbon in our living forests, and to a degree nearly unmatched in the world. If this potential is given a value, then we may well seen an end to the destruction of our mature forests for saw logs and pulp that could just as easily be manufactured from private plantation materials.

The concept of community-based stewardship in carrying out forest restoration is attainable, as evidenced by the many successful public-private partnerships that exist today. But it’s unclear if the Forest Service and BLM bureaucracies are flexible or willing enough to embrace the idea.

Instead, a new conservation-based form of administration may be needed — broader than the National Park Service in scope, but borrowing from the Park Service ethic of conservation and sustainability. The Cascade Forest Preserve, perhaps, extending from the Sierras to the Canadian border? Given the grave implications of climate change, it is impossible to think too big or boldly as we search for a way forward.