Author’s note: many of you know that I’ve been involved with Trailkeepers of Oregon (TKO) since we formed in 2007 — in fact, I’m the sole remaining founder still serving on the TKO board! For the past few years, I’ve also been serving as the board president, but I’ll be handing the reins for that role over to a new president in January so that I can refocus my efforts with the board on trail stewardship and advocacy projects… and few more articles here, too!

While this blog is normally focused on Mount Hood and the Gorge, I hope you’ll indulge me (again) in wearing my TKO hat on this #GivingTuesday in a pitch for your support of TKO — especially if you spend time on our public trails. You can donate through either of these portals:

You’re also welcome to join our volunteer crews (really!), but anyone can support us by becoming a member. To make this article it a bit more interesting, the following is a bit of history of the organization. If you’d like to learn more about TKO, read on…!

Way back in 2006, local hikers Jeff Statt and Jeff Black created the Portland Hikers Forum, a private web board for hikers and trail enthusiasts. The community grew quickly, but never became a profitable commercial endeavor — as was the case with most forums in those days.

Instead, the Portland Hikers Forum proved to be a great tool for organizing. With the hiking community increasingly alarmed by the state of trail maintenance in Oregon, several of us organized what would become TKO’s founding trail project in the summer of 2007.

That trail is now known as the Old Vista Ridge Trail, and at the time was a largely forgotten, completely overgrown route on Mount Hood north side. An ancient “Trail Not Maintained” sign was bolted to a tree, an unintended challenge for a group of hikers looking to reverse the trend of trail neglect!

Our founding president, Jeff Statt at Angels Rest in 2008

After an inspiring (and tiring!) day of brushing out huckleberries and mountain ash, much progress was made in restoring the old route, and the idea of TKO was born. But while the need for volunteer help at Old Vista Ridge was obvious, it was also completely unsanctioned, and it was clear that something more formal (an sanctioned) was needed to launch a bona fide stewardship program.

Shortly after the trip, Jeff Statt organized the first meeting of the as-yet un-named organization dedicated to trail stewardship. The invitees included non-profits with an interest in trails and conservation and land managers from the U.S. Forest Service and Oregon Parks and Recreation. The strong consensus at this inaugural meeting was that a need existed for an organization like TKO to take the lead on trail stewardship in Oregon — and so the work began to launch a new non-profit! 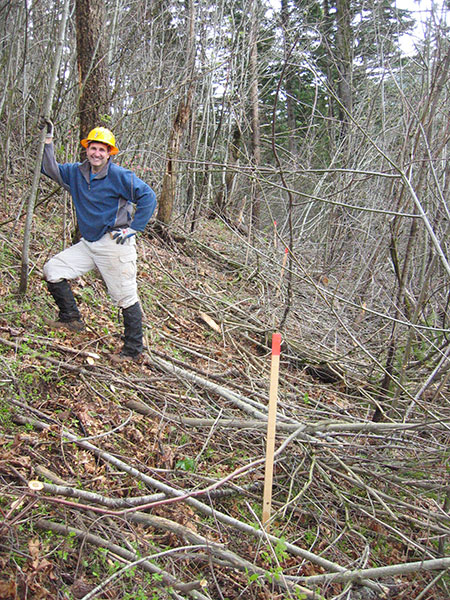 Early on, the board consisted of non-profit staff from supporting organizations, including Friends of the Columbia Gorge, the Pacific Crest Trail Association, Northwest Forest Conservancy, Trails Club of Oregon, Washington Trails Association (WTA) and BARK.

TKO volunteers building the re-route at Angels Rest in 2008

The new organization was initially called the Oregon Trails Conservancy. That name lasted for a few months, then evolved into the Trails Association of Oregon (TAO), mirroring the WTA, our someday model for growing the organization. By mid-2008, the board decided that “TAO” wasn’t quite the right acronym for the group, and Trailkeepers of Oregon — or TKO — was finally born.

Volunteer artist (and founding board member) Jamie Chabot created the iconic logo that we still use today. It’s a modern twist on the old CCC themes of the 1930s, including the fir tree at the center that echoes details found in some of the CCC structures at the Eagle Creek Campground in the Columbia River Gorge.

By early 2008, TKO had already sponsored several stewardship projects, mostly focused on trail maintenance and restoration in places around the greater Portland region. But in April 2008, we kicked off our first “new” project, a major re-route of the heavily used (over-used, really) Angels Rest Trail in the Columbia Gorge.

The project involved cutting a new trail through a thicket of Bigleaf maple whips that had grown up in the wake of the 1991 Multnomah Falls Fire that swept across Angels Rest. It was tough work, but seeing a completely new trail come to life was a big step forward for TKO, and helped us focus our mission on the need for more new trails to keep pace with growing demand in the region.

We were on our way! 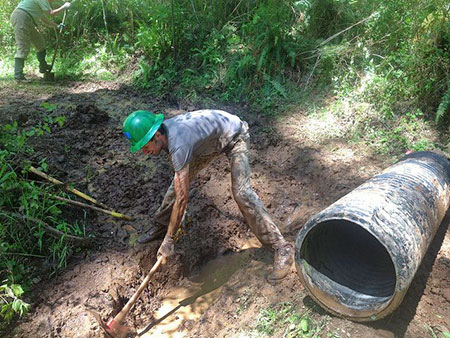 The finished culvert at Camp Wilkerson in 2012

By 2009, Jeff Statt had transferred ownership of the (then) Portland Hikers Forum and Field Guide to TKO for $1, and TKO adopted its core mission of “stewardship (our trail projects), education (our field guide) and community (our forum)” that still guides the organization today. 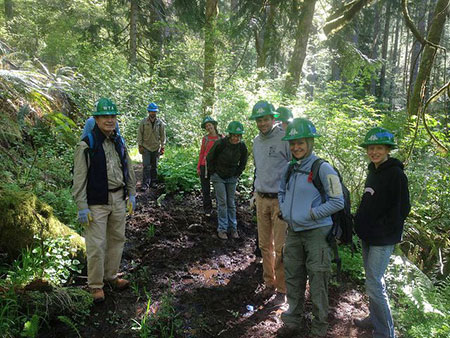 Happy volunteers at Camp Wilkerson after a good day of trailkeeping!

In 2014, TKO’s somewhat clunky website was upgraded by volunteers to allow for online event registration — another big step forward, and one that allowed us to accelerate our stewardship projects and have a bigger impact on the ground. This ushered in a new era of many more trail projects and TKO finally winning some grants to help fund our work.

The first of these grants came from REI in 2016, and allowed TKO to purchase enough tool sets for two additional crews of up to 12 volunteers, greatly expanding our impact.

More grants followed from REI and Travel Oregon in 2017, allowing us to celebrate TKO’s 10th anniversary by hiring Steve Kruger as first executive director. Bringing Steve onboard has had a huge impact on our ability to manage our ever-growing schedule of trail projects and our Oregon Hikers Forum and Oregon Hikers Field Guide. Steve is also a skilled crew leader, and regularly takes our volunteers into the field for trail projects.

We’ve also started a membership program in 2017, and as mentioned in the introduction to this article, I hope you’ll consider joining TKO! We’re a 501(c)(3) non-profit, and this year were selected to be in Willamette Week’s Give! Guide — and that’s the preferred way to donate, though you can also join at our website. Both links are at the top of the article.

Here are some highlights of what TKO has been doing for Oregon’s trails over the past few years, by the numbers:

Yes, the boardwalk at Mirror Lake was still there when TKO crews cleared the brush in 2014! 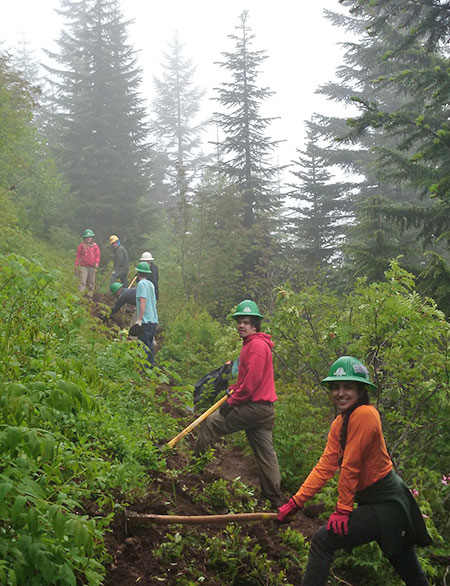 Many of you have asked me about the future of trails in the Gorge after the Eagle Creek Fire after an earlier article in the blog about the fire. In early October, the Forest Service called a meeting of Gorge advocates a few weeks ago to begin planning the recovery, and Steve Kruger and I were there on behalf of TKO. While there were dozens of organizations represented, the eyes in the room kept turning toward TKO as the question of restoring our Gorge trails emerged as the most pressing concern.

As the meeting wrapped up, the Forest Service and State Parks staff turned to us, as well. Everyone is looking to TKO to help lead this effort.

So, that’s the good news. But as much as TKO has earned our growing reputation, we’re also a very young organization with a lot of work ahead of us to become the truly statewide force that we’ve always known Oregon needed. 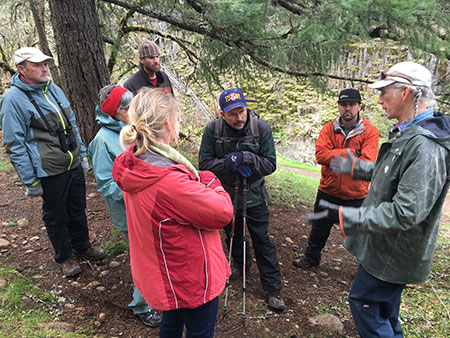 Planning the West Fork Trail at Punchbowl Park in 2016

Building the Dogwood Trail at Punchbowl Park in 2017

What’s next for TKO? Here’s what we’re planning for 2018 — and what our membership program and other fundraising efforts will help deliver:

Steve Kruger’s work will continue to focus on TKO’s development and expanding our partnerships with public agencies, nonprofits and corporate sponsors to expand our reach and build a sustainable nonprofit statewide

Meadow sod from the new trail was used to decommission the old, eroded route

We’re also planning to supplement our volunteer crew leader program with interns from the Student Conservation Association to bring new crews to the Oregon Coast, Mount Hood and Columbia Gorge. This will allow us to put still more volunteers on the ground where they are needed.

TKO will also sponsor a second-annual Oregon Trails Summit in 2018, and will help facilitate statewide coalition and advocacy efforts through the newly created Oregon Office of Outdoor Recreation

If all of this sounds exciting… well, it is! Thanks for reading this far and considering a donation or membership with TKO, everyone — we’ll make sure your support counts!

The author on the Butte Falls Trail in October 2017