Just over a decade has passed since I first visited Owl Point, a spectacular rocky viewpoint along the Old Vista Ridge Trail, on Mount Hood’s north side. At the time, the trail had fallen into disrepair after years of neglect, but it has since rebounded thanks to volunteers pitching in.

Since that first visit, I’ve been to Owl Point every year to admire and photograph the dramatic view of Mount Hood and enjoy the relative solitude, compared to many other places on the mountain. I’ve watched the landscape change, sometimes dramatically, as was the case with the 2011 Dollar Lake Fire that swept the north side of Mount Hood. But I’ve also watched more subtle changes as the details of this beautiful spot become ever more familiar.

One of those more subtle features is a craggy Noble Fir perched among the boulders on the exposed south flank of Owl Point. This old survivor can be seen in the far left of one of the first photos I shot in 2006 (at the top of the article) and in the photo, above, taken in 2008 by trail volunteer Andy Prahl.

If you’ve followed this blog over the years, you’ve seen earlier articles about “sentinel trees”. These are trees that seem to defy the odds and elements in their size, grandeur or simple tenacity in finding a way to survive. This tree certainly qualifies.

From an aesthetic perspective, the old Noble Fir at Owl Point is a gift for photographers, adding testimony to the rugged, often harsh conditions found there. The old tree also adds a nice visual balance and interest to the scene. So, in this way the Owl Point sentinel tree has become an old friend to this photographer.

Owl Point in July 2011, with the old Noble Fir on the left – just days before the Dollar Lake Fire

In 2011, I visited Owl Point just a few days before the catastrophic Dollar Lake Fire swept across the north slopes of Mount Hood, burning 6,300 acres of subalpine wilderness. The photo above is among the last that I captured of the once-green forests on the mountain before the fire changed the landscape.

Though the fire burned for more than two months that summer, Owl Point and the Old Vista Ridge Trail were somehow spared and the craggy old Noble Fir sentinel tree at Old Point lived on.

After the fire, Owl Point served as one of the best places to absorb the full scope of the Dollar Lake Fire, with nearly the entire extent of the burn visible from there. While the brown swath of scorched trees was jarring to look at, it was also a reminder that fire is a regular and necessary visitor to our forests.

The forests we lost to the fire have since given us a new window into how new forests emerge from the ashes, a process as old as the forests, themselves. 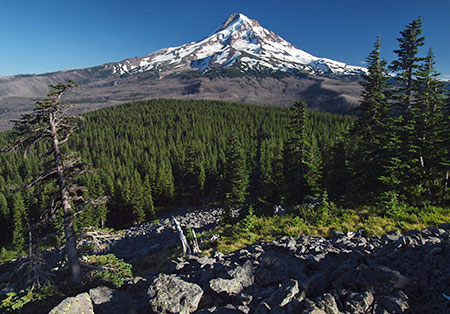 The old Noble Fir sentinel tree at Owl Point had witnessed fire before the Dollar Lake Fire, and from a much closer vantage point. Sometime in the early 1900s, a similarly large fire swept across the high country north of Mount Hood, scorching Owl Point and thousands of acres in the surrounding area.

This 1952 photo (below) shows the forest recovery from this earlier fire at Owl Point just getting underway, decades after the burn. In fact, the area is still in recovery today, a century after the fire. 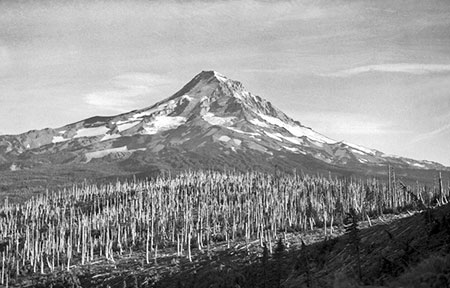 The view from 1952 is an inverse scene from what we see today, with a scorched foreground and lush, green slopes on Mount Hood. These contrasting images over time area a reminder of the fire cycles that are as natural to the area as rain and wind.

A closer look at the 1952 photo reveals several trees that survived the older fire, thanks to their isolation in the open talus fields below Owl Point:

One of these fortunate survivors is the sentinel tree at Owl Point that we know today. Though only 30-40 feet tall, it could easily be a century or more old, stunted by the harsh conditions on the talus slope.

While the old Noble Fir at Owl Point appears to have dodged a couple of forest fires in its lifetime, the tree began to show signs of stress in 2012, the year after the Dollar Lake Fire. Foliage (below) from some of its lower limbs began to drop, suggesting the beginning of its decline.

Owl Point sentinel tree in 2012, one year after the Dollar Lake Fire

By 2014 (below), the signs of stress were more ominous, and it was clear that the old sentinel tree was losing its battle to survive the elements at Owl Point.

After the snowpack melted off in 2016, the situation for the old tree had become dire as it struggled to maintain the remaining foliage in its crown (below), a sign that the tree might not survive the season.

But a closer look (below) this summer at the dying tree tells a different story. While the exposed upper portion of the tree has clearly lost its battle, a fringe of healthy new foliage is thriving around the base of the tree. It turns out that while the Owl Point Noble Fir has lost its main trunk, it is still very much alive.

Owl Point sentinel tree finally succumbs to the elements in 2017

An even closer look at the base of the old tree (below) shows the secret of “krummholz”, the name for stunted trees that survive in harsh alpine environments. Trees like this Noble Fir adapt to their conditions by producing new leaders from their lowest branches to replace dying or broken tops.

These new leaders on Noble Fir growing as krummholz often form dense mats of foliage at the base of a tree, low enough to be protected by winter snowpack from the harshest weather conditions. This is clearly the case for the Owl Point sentinel tree.

A new beginning for the Owl Point Noble Fir…

The classic example of a krummholz in Mount Hood country is the Whitebark Pine, a tree that thrives above 5,000 feet, often gnarled beyond imagination by the elements. The example below shows the skeleton of an ancient Whitebark Pine (on Lookout Mountain), surrounded by new leaders that have merged from limbs flattened to the ground by winter snowpack.

While winter conditions regularly shear off new growth that pokes above the snowpack on a krummholz, a rapidly growing new trunk like the one emerging at the base of the Owl Point sentinel tree can eventually survive and grow to replace the older tree. This is clearly a slow process, and one that I won’t likely be around to witness!

But in the near-term, photographers like me will be able to watch the dying trunk of the Owl Point sentinel tree gradually weathering to become a dramatic sun-bleached snag that will be photogenic in its own right. And, as the new leader continues to rise from the base of the old trunk, this striking old tree will continue tell a powerful story of survival.

You can visit Owl Point and see its sentinel Noble Fir by following the 4-mile round trip Old Vista Ridge hike from the Vista Ridge Trailhead. The hike is described here in the Oregon Hikers Field Guide.