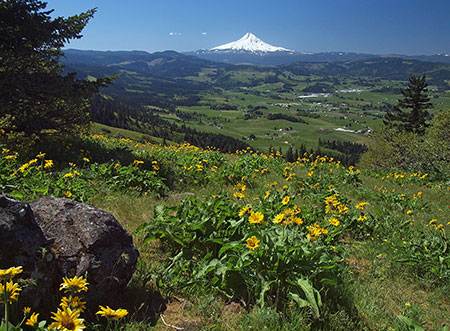 Lots of activity on Mount Hood this spring, so this roundup is a mash-up of three updates: one good, one bad and one just plain ugly. We’ll start with the latter, and get that part over with!

Anywhere else, this would be a national park or preserve… here, just another clearcut (same spot as the opening photo)

Last winter the SDS Lumber Co. of Bingen, Washington quietly put the word out to the hiking community that the beloved Hood River Mountain trail would be closed this year for a logging operation. Not included in the announcement was the fact that the trail would actually be destroyed in the process, never to reopen.

It was their right, of course, and as the company SDS Lumber has been more generous than most timber companies in allowing hikers and cyclists to visits its forest holdings. The company had been planning this for a while, sending requests to hiking websites as long as two years ago to pull trip guides describing the Hood River Mountain trail. 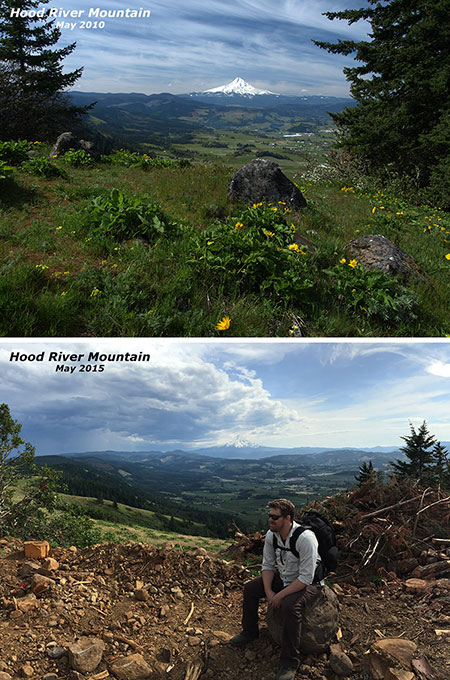 But the logging operation that began this spring turned out to be worse than anyone who loved Hood River Mountain could have imagined. Not only was the old trail to the summit completely destroyed, SDS pushed a 25-foot deep pile of gravel and debris over the actual summit of the mountain, burying the gorgeous meadows and boulder garden where countless hikers used to take in the stunning views. 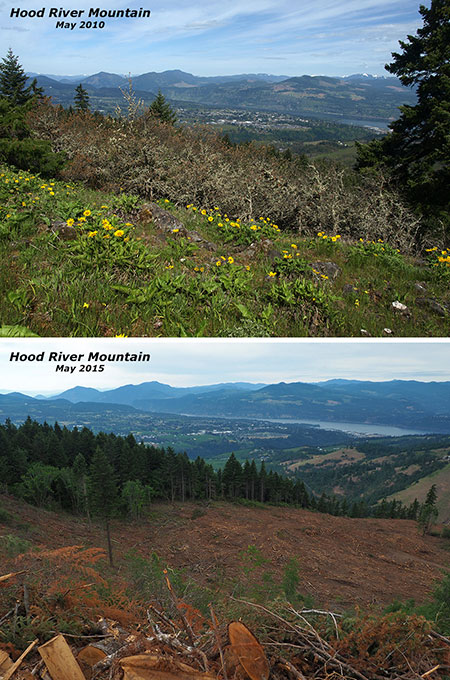 Then-and-now views toward Hood River from the summit

The destruction of the summit area wasn’t out of malice, though arguably, there’s a certain amount of malicious disregard for the environment required to treat any piece of land with this degree of brutal disregard, no matter who owns it. But in fact, the bulldozers flattened the summit simply so it could serve as the log yarding area for logs cut from a large clearcut encompassing the entire north slope of Hood River Mountain.

Then-and-now view north toward Mount Adams from the summit

As tragic as this turn of events is for local hikers, it’s also a useful reminder that scenic gems like Hood River Mountain belong in the hands of the public, not timber companies whose sole master is the corporate bottom line. According to one local activist, SDS Lumber declined an offer from a national land trust for the property a few years ago, so that option seems to be out of the question — or is it?

Ironically, the recent logging might open the door for another offer from a land trust, now that the lucrative timber has been logged. Another possibility could be a land swap of less prominent Hood River County or Forest Service lands for this site. A swap offer could also be timely, now that the land has less immediate value to the timber industry for the standing board feet it represents.

It’s tempting to judge SDS Lumber for the destruction of Hood River Mountain — and for those keeping track, SDS was also involved in the notorious clearcut that marred the south wall of the Columbia River Gorge two years ago, above Koberg State Park.

But the function of a corporation is to make money, after all, and cutting trees at maximum profit is how STS does it. That said, clearcutting is discredited practice and scientifically indefensible. So is spraying the clear-cut with massive quantities of herbicides after logging to block any sort of natural recovery process and allow for a monoculture Douglas fir plantation to replace what was so recently a biologically diverse forest.

Panoramic view of the new clearcut from the “new” summit

If SDS allows the new clearcut on Hood River Mountain to recover naturally in the coming years, with no herbicides, it will show itself to be better than most timber corporations. Most notable in the latter practice is Weyerhauser, which has picked up the baton in the continued deforestation (and conversion to monoculture plantations) of the nearby West Fork Hood River valley that began when the private lands there were still owned by Longview Fibre.

We’ll know next spring, when the clearcut will either be green with recovering understory species (and over time, young conifers) — or brown and completely dead following an herbicide treatment. Let’s hope SDS allows nature to be part of the recovery, now that the trees have been cut. 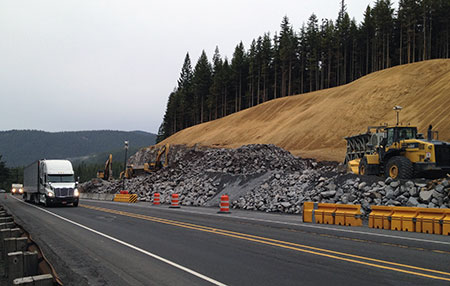 What the slope across from Mirror Lake looks like now

If you haven’t driven the Laurel Hill section of U.S. 26 lately, you’re in for a shock. As described in a series of articles in this blog, ODOT is in the processing of widening this stretch of highway to “improve safety”. Translation: they are adding passing lanes to allow skiers to “safely” speed just a little faster down the mountain on busy winter weekends.

As its main “safety” feature, ODOT is also adding a center median barrier from the base of Laurel Hill all the way to Government Camp to prevent head-on collisions (though these are exceptionally rare, according to ODOT’s own data) as part of the $37 million widening project. ODOT’s own safetly consultants suggested that simply lowering and enforcing speeds during the few snowy evenings on weekends when their data show crashes happening could have accomplished the same goal for less, and with much less impact on the mountain, but widening the highway was always the goal.

The tradeoff for installing freeway-style median barricades will be more difficult access to the Mirror Lake and Laurel Hill trailheads, with those approaching from Government Camp forced to drive to the bottom of Laurel Hill, complete a U-turn, then drive several miles back up the hill to park at the trailhead. 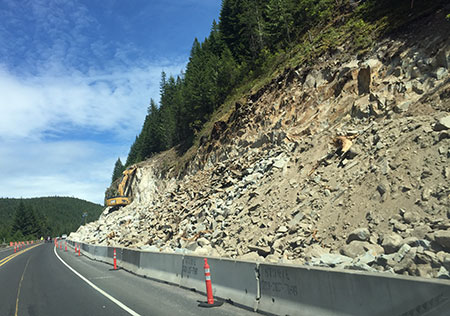 To fit all of these “improvements” in, ODOT is carving away massive chunks of Laurel Hill, from the Mirror Lake trailhead all the way down to the “map curve” — the corner with a pullout near the bottom of Laurel Hill where Mount Hood first comes into view. These scars along a route designated as a “scenic byway” by ODOT will take generations to heal, if ever.

To highway engineers, the $37 million price tag for this project might not seem a lot (just a quarter of what was spent to design a bridge that will never be built over the Columbia River, for example!). But just think what $37 million might have bought at Laurel Hill: how about a parkway design that would have managed the ski traffic by calming it, not speeding it up, while also respecting all those who seek a calm and scenic driving experience as explore Mount Hood?

Or better yet, how about restoring the extensive abandoned segments of the old loop highway, just as ODOT has been doing in the Columbia River Gorge, to provide a world-class way for bikes and hikers to travel through the area?

Nope. These alternative projects will have to wait for another day — and new mindset at ODOT. 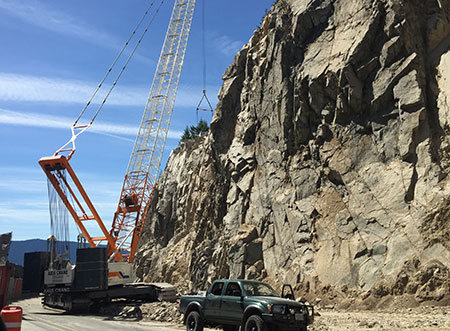 The rock wall opposite the popular pullout at the “map curve” is being massively cut back, supposedly to prevent loose rocks from landing on the highway… and to widen the road, of course

Most of the destruction thus far is according to plan, though the quality of the concrete medians is still an open question: ODOT promised “architectural” medians that would attempt to complement the scenic nature of the highway, but has since been backing away from that commitment. Generic Jersey barricades (like those found on urban freeways) are more likely, and would be strangely appropriate, given the overall travesty of this project. Anything better would just be lipstick on a pig, after all.

A post-mortem of the widening project will be posted in this blog upon completion next year. For background, here is a previous articles on the U.S. 26 widening project: Highway 26: Last Chance to weigh in! (scroll to the bottom of the linked article for additional links to articles about the highway project).

Thankfully, not all of the news on Mount Hood is ugly or even bad! Consider that local hiker Bill Imholt not only spotted a mountain goat on Yocum Ridge a few weeks ago, he also captured a photo of it! The above photo shows the

Bill then contacted the Oregon Department of Fish and Wildlife (ODFW), who speculate that the goat (a male) migrated to Mount Hood from a group of goats introduced to the east side of Mount Jefferson in 2010. That’s amazing, when you consider the 50-mile journey would mostly be through forest and crosses several paved roads along the way!

In this 2011 blog article, I proposed reintroducing goats[/link] to Mount Hood based upon the relatively large areas of wilderness now protected on the mountain. So, while the ODFW has no plans to bring more goats to the mountain at this time, it’s heartening to know the goats may have their own plans to come back to Mount Hood! Nature bats last!

…and a teaser… watch for more good news to come!

3 thoughts on “WyEast Roundup: the good, the bad and the ugly!”